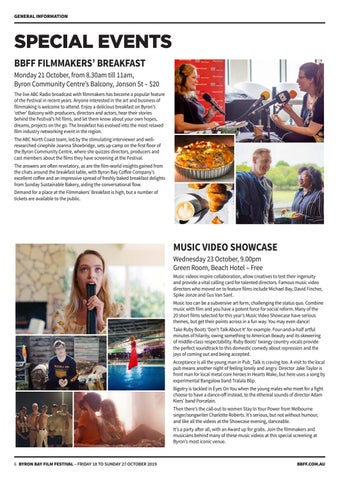 Monday 21 October, from 8.30am till 11am, Byron Community Centre’s Balcony, Jonson St – $20 The live ABC Radio broadcast with filmmakers has become a popular feature of the Festival in recent years. Anyone interested in the art and business of filmmaking is welcome to attend. Enjoy a delicious breakfast on Byron’s ‘other’ Balcony with producers, directors and actors, hear their stories behind the Festival’s hit films, and let them know about your own hopes, dreams, projects on the go. The breakfast has evolved into the most relaxed film industry networking event in the region. The ABC North Coast team, led by the stimulating interviewer and wellresearched cinephile Joanna Shoebridge, sets up camp on the first floor of the Byron Community Centre, where she quizzes directors, producers and cast members about the films they have screening at the Festival. The answers are often revelatory, as are the film-world insights gained from the chats around the breakfast table, with Byron Bay Coffee Company’s excellent coffee and an impressive spread of freshly baked breakfast delights from Sunday Sustainable Bakery, aiding the conversational flow. Demand for a place at the Filmmakers’ Breakfast is high, but a number of tickets are available to the public.

Music videos inspire collaboration, allow creatives to test their ingenuity and provide a vital calling card for talented directors. Famous music video directors who moved on to feature films include Michael Bay, David Fincher, Spike Jonze and Gus Van Sant. Music too can be a subversive art form, challenging the status quo. Combine music with film and you have a potent force for social reform. Many of the 20 short films selected for this year’s Music Video Showcase have serious themes, but get their points across in a fun way. You may even dance! Take Ruby Boots ‘Don’t Talk About It’ for example. Four-and-a-half artful minutes of hilarity, owing something to American Beauty and its skewering of middle-class respectability. Ruby Boots’ twangy country vocals provide the perfect soundtrack to this domestic comedy about repression and the joys of coming out and being accepted. Acceptance is all the young man in Pub_Talk is craving too. A visit to the local pub means another night of feeling lonely and angry. Director Jake Taylor is front man for local metal core heroes In Hearts Wake, but here uses a song by experimental Bangalow band Tralala Blip. Bigotry is tackled in Eyes On You when the young males who meet for a fight choose to have a dance-off instead, to the ethereal sounds of director Adam Kiers’ band Porcelain. Then there’s the call-out to women Stay In Your Power from Melbourne singer/songwriter Charlotte Roberts. It’s serious, but not without humour, and like all the videos at the Showcase evening, danceable. It’s a party after all, with an Award up for grabs. Join the filmmakers and musicians behind many of these music videos at this special screening at Byron’s most iconic venue.