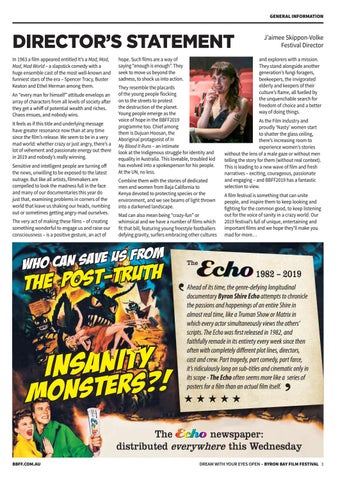 DIRECTOR’S STATEMENT An “every man for himself” attitude envelops an array of characters from all levels of society after they get a whiff of potential wealth and riches. Chaos ensues, and nobody wins. It feels as if this title and underlying message have greater resonance now than at any time since the film’s release. We seem to be in a very mad world: whether crazy or just angry, there’s a lot of vehement and passionate energy out there in 2019 and nobody’s really winning. Sensitive and intelligent people are turning off the news, unwilling to be exposed to the latest outrage. But like all artists, filmmakers are compelled to look the madness full in the face and many of our documentaries this year do just that, examining problems in corners of the world that leave us shaking our heads, numbing out or sometimes getting angry-mad ourselves. The very act of making these films – of creating something wonderful to engage us and raise our consciousness – is a positive gesture, an act of

hope. Such films are a way of saying “enough is enough”. They seek to move us beyond the sadness, to shock us into action. They resemble the placards of the young people flocking on to the streets to protest the destruction of the planet. Young people emerge as the voice of hope in the BBFF2019 programme too. Chief among them is Dujuan Hoosan, the Aboriginal protagonist of In My Blood It Runs – an intimate look at the Indigenous struggle for identity and equality in Australia. This loveable, troubled kid has evolved into a spokesperson for his people. At the UN, no less. Combine them with the stories of dedicated men and women from Baja California to Kenya devoted to protecting species or the environment, and we see beams of light thrown into a darkened landscape. Mad can also mean being “crazy-fun” or whimsical and we have a number of films which fit that bill, featuring young freestyle footballers defying gravity, surfers embracing other cultures

us Who can save

and explorers with a mission. They stand alongside another generation’s fungi foragers, beekeepers, the invigorated elderly and keepers of their culture’s flame, all fuelled by the unquenchable search for freedom of choice and a better way of doing things. As the Film Industry and proudly ‘Nasty’ women start to shatter the glass ceiling, there’s increasing room to experience women’s stories without the lens of a male gaze or without men telling the story for them (without real context). This is leading to a new wave of film and fresh narratives – exciting, courageous, passionate and engaging – and BBFF2019 has a fantastic selection to view. A film festival is something that can unite people, and inspire them to keep looking and fighting for the common good, to keep listening out for the voice of sanity in a crazy world. Our 2019 festival’s full of unique, entertaining and important films and we hope they’ll make you mad for more…

1982 – 2019 Ahead of its time, the genre-defying longitudinal documentary Byron Shire Echo attempts to chronicle the passions and happenings of an entire Shire in almost real time, like a Truman Show or Matrix in which every actor simultaneously views the others’ scripts. The Echo was first released in 1982, and faithfully remade in its entirety every week since then often with completely different plot lines, directors, cast and crew. Part tragedy, part comedy, part farce, it’s ridiculously long on sub-titles and cinematic only in its scope - The Echo often seems more like a series of posters for a film than an actual film itself.

In 1963 a film appeared entitled It’s a Mad, Mad, Mad, Mad World – a slapstick comedy with a huge ensemble cast of the most well-known and funniest stars of the era – Spencer Tracy, Buster Keaton and Ethel Merman among them.