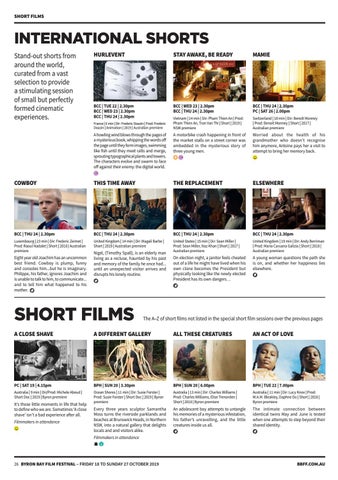 A howling wind blows through the pages of a mysterious book, whipping the words off the page until they form images, swimming like fish until they meet cells and merge, sprouting typographical plants and towers. The characters evolve and swarm to face off against their enemy: the digital world.

A motorbike crash happening in front of the market stalls on a street corner was embedded in the mysterious story of three young men.

Worried about the health of his grandmother who doesn’t recognise him anymore, Antoine pays her a visit to attempt to bring her memory back.

On election night, a janitor feels cheated out of a life he might have lived when his own clone becomes the President but physically looking like the newly elected President has its own dangers…

A young woman questions the path she is on, and whether her happiness lies elsewhere.

Stand-out shorts from around the world, curated from a vast selection to provide a stimulating session of small but perfectly formed cinematic experiences.

Eight year old Joachim has an uncommon best friend. Cowboy is plump, funny and consoles him...but he is imaginary. Philippe, his father, ignores Joachim and is unable to talk to him, to communicate... and to tell him what happened to his mother.

Nigel, (Timothy Spall), is an elderly man living as a recluse, haunted by his past and memory of the family he once had... until an unexpected visitor arrives and disrupts his lonely routine.

AN ACT OF LOVE

Every three years sculptor Samantha Moss turns the riverside parklands and beaches at Brunswick Heads, in Northern NSW, into a natural gallery that delights locals and and visitors alike.

An adolescent boy attempts to untangle his memories of a mysterious infestation, his father’s unravelling, and the little creatures inside us all.

The intimate connection between identical twins May and June is tested when one attempts to step beyond their shared identity.

It’s those little moments in life that help to define who we are. Sometimes ‘A close shave’ isn’t a bad experience after all. Filmmakers in attendance