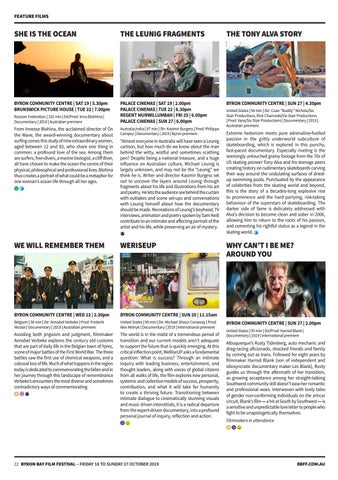 SHE IS THE OCEAN

From Innesse Blohina, the acclaimed director of On the Wave, the award-winning documentary about surfing comes this study of nine extraordinary women, aged between 12 and 83, who share one thing in common: a profound love of the sea. Among them are surfers, free-divers, a marine biologist, a cliff diver, all have chosen to make the ocean the centre of their physical, philosophical and professional lives. Blohina thus creates a portrait of what could be a metaphor for one woman’s ocean life through all her ages.

WE WILL REMEMBER THEM

Avoiding both jingoism and judgment, filmmaker Annabel Verbeke explores the century old customs that are part of daily life in the Belgian town of Ypres, scene of major battles of the First World War. The three battles saw the first use of chemical weapons, and a colossal loss of life. Much of what happens in the region today is dedicated to commemorating the fallen and in her journey through this landscape of remembrance Verbeke’s encounters the most diverse and sometimes contradictory ways of commemorating.

The world is in the midst of a tremendous period of transition and our current models aren’t adequate to support the future that is quickly emerging. At this critical inflection point, WeRiseUP asks a fundamental question: What is success? Through an intimate inquiry with leading business, entertainment, and thought leaders, along with voices of global citizens from all walks of life, the film explores new personal, systemic and collective models of success, prosperity, contribution, and what it will take for humanity to create a thriving future. Transitioning between intimate dialogue to cinematically stunning visuals and music driven interstitials, it is a radical departure from the expert-driven documentary, into a profound personal journal of inquiry, reflection and action.

“Almost everyone in Australia will have seen a Leunig cartoon, but how much do we know about the man behind the witty, wistful and sometimes scathing pen? Despite being a national treasure, and a huge influence on Australian culture, Michael Leunig is largely unknown, and may not be the “Leunig” we think he is. Writer and director Kasimir Burgess set out to uncover the layers around Leunig through fragments about his life and illustrations from his art and poetry. He lets the audience see behind the curtain with outtakes and scene set-ups and conversations with Leunig himself about how the documentary should be made. Recreations of Leunig’s boyhood, TV interviews, animation and poetry spoken by Sam Neill contribute to an intimate and affecting portrait of the artist and his life, while preserving an air of mystery.

Extreme hedonism meets pure adrenaline-fuelled passion in the gritty underworld subculture of skateboarding, which is explored in this punchy, fast-paced documentary. Especially riveting is the seemingly untouched grainy footage from the 70s of US skating pioneer Tony Alva and his teenage peers creating history on rudimentary skateboards carving their way around the undulating surfaces of driedup swimming pools. Punctuated by the appearance of celebrities from the skating world and beyond, this is the story of a decades-long explosive rise to prominence and the hard partying, risk-taking behaviour of the superstars of skateboarding. The darker side of fame is delicately addressed with Alva’s decision to become clean and sober in 2006, allowing him to return to the roots of his passion, and cementing his rightful status as a legend in the skating world.

WHY CAN’T I BE ME? AROUND YOU

Albuquerque’s Rusty Tidenberg, auto mechanic and drag-racing aficionado, shocked friends and family by coming out as trans. Followed for eight years by filmmaker Harrod Blank (son of independent and idiosyncratic documentary maker Les Blank), Rusty guides us through the aftermath of her transition, as growing acceptance among her straight-talking Southwest community still doesn’t ease her romantic and professional woes. Interwoven with lively tales of gender non-conforming individuals on the art-car circuit, Blank’s film — a hit at South by Southwest — is a sensitive and unpredictable love letter to people who fight to be unapologetically themselves. Filmmakers in attendance