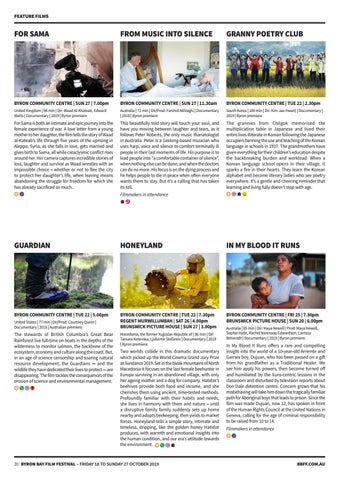 FROM MUSIC INTO SILENCE

For Sama is both an intimate and epic journey into the female experience of war. A love letter from a young mother to her daughter, the film tells the story of Waad al-Kateab’s life through five years of the uprising in Aleppo, Syria, as she falls in love, gets married and gives birth to Sama, all while cataclysmic conflict rises around her. Her camera captures incredible stories of loss, laughter and survival as Waad wrestles with an impossible choice – whether or not to flee the city to protect her daughter’s life, when leaving means abandoning the struggle for freedom for which she has already sacrificed so much..

This beautifully told story will touch your soul, and have you moving between laughter and tears, as it follows Peter Roberts, the only music thanatologist in Australia. Peter is a Geelong-based musician who uses harp, voice and silence to comfort terminally ill people in their last moments of life. His purpose is to lead people into “a comfortable container of silence”, when nothing else can be done, and when the doctors can do no more. His focus is on the dying process and he helps people to die in peace when often everyone wants them to stay. But it’s a calling that has taken its toll.

The grannies from Chilgok memorised the multiplication table in Japanese and lived their entire lives illiterate in Korean following the Japanese occupiers banning the use and teaching of the Korean language in schools in 1937. The grandmothers have given everything for their children’s education despite the backbreaking burden and workload. When a Korean language school opens in their village, it sparks a fire in their hearts. They learn the Korean alphabet and become literary ladies who see poetry everywhere. It’s a gentle and cheering reminder that learning and living fully doesn’t stop with age.

IN MY BLOOD IT RUNS

The stewards of British Columbia’s Great Bear Rainforest live full-time on boats in the depths of the wilderness to monitor salmon, the backbone of the ecosystem, economy and culture along the coast. But, in an age of science censorship and soaring natural resource development, the Guardians — and the wildlife they have dedicated their lives to protect — are disappearing. The film tackles the consequences of the erosion of science and environmental management.

Two worlds collide in this dramatic documentary which picked up the World Cinema Grand Jury Prize at Sundance 2019. Set in the bleak mountains of North Macedonia it focuses on the last female beehunter in Europe surviving in an abandoned village, with only her ageing mother and a dog for company. Hatidze’s beehives provide both food and income, and she cherishes them using ancient, time-tested methods. Profoundly familiar with their habits and needs, she lives in harmony with them and nature – until a disruptive family family suddenly sets up home nearby and adopts beekeeping, then yields to market forces. Honeyland tells a simple story, intimate and timeless, dripping, like the golden honey Hatidze produces, with warmth and emotional insights into the human condition, and our era’s attitude towards the environment.

In My Blood It Runs offers a rare and compelling insight into the world of a 10-year-old Arrernte and Garrwa boy, Dujuan, who has been passed on a gift from his grandfather as a Traditional Healer. We see him apply his powers, then become turned off and humiliated by the Euro-centric lessons in the classroom and disturbed by television reports about Don Dale detention centre. Concern grows that his misbehaving will take him down the tragically familiar path for Aboriginal boys that leads to prison. Since the film was made Dujuan, now 12, has spoken in front of the Human Rights Council at the United Nations in Geneva, calling for the age of criminal responsibility to be raised from 10 to 14. Filmmakers in attendance