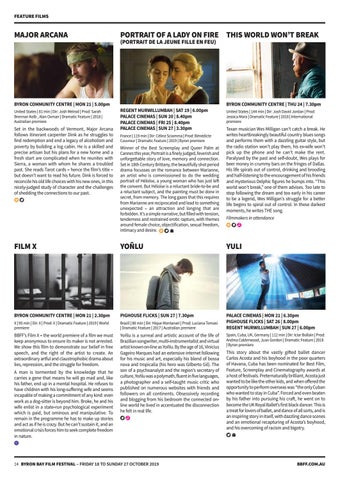 Set in the backwoods of Vermont, Major Arcana follows itinerant carpenter Dink as he struggles to find redemption and end a legacy of alcoholism and poverty by building a log cabin. He is a skilled and precise artisan but his plans for a new home and a fresh start are complicated when he reunites with Sierra, a woman with whom he shares a troubled past. She reads Tarot cards – hence the film’s title – but doesn’t want to read his future. Dink is forced to reconcile his old life choices with his new ones, in this nicely-judged study of character and the challenges of shedding the connections to our past.

Winner of the Best Screenplay and Queer Palm at Cannes this year, Portrait is a finely judged, feverish and unforgettable story of love, memory and connection. Set in 18th Century Brittany, the beautifully shot period drama focusses on the romance between Marianne, an artist who is commissioned to do the wedding portrait of Héloïse, a young woman who has just left the convent. But Héloïse is a reluctant bride-to-be and a reluctant subject, and the painting must be done in secret, from memory. The long gazes that this requires from Marianne are reciprocated and lead to something unexpected – an attraction and longing that are forbidden. It’s a simple narrative, but filled with tension, tenderness and restrained erotic rapture, with themes around female choice, objectification, sexual freedom, intimacy and desire.

Texan musician Wes Milligan can’t catch a break. He writes heartbreakingly beautiful country blues songs and performs them with a dazzling guitar style, but the radio station won’t play them, his ex-wife won’t pick up the phone and he can’t make the rent. Paralysed by the past and self-doubt, Wes plays for beer money in crummy bars on the fringes of Dallas. His life spirals out of control, drinking and brooding and half-listening to the encouragement of his friends and mysterious Delphic figures he bumps into. “This world won’t break,” one of them advises. Too late to stop following the dream and too early in his career to be a legend, Wes Milligan’s struggle for a better life begins to spiral out of control. In these darkest moments, he writes THE song. Filmmakers in attendance

BBFF’s Film X – the world premiere of a film we must keep anonymous to ensure its maker is not arrested. We show this film to demonstrate our belief in free speech, and the right of the artist to create. An extraordinary artful and claustrophobic drama about lies, repression, and the struggle for freedom.

Yoñlu is a surreal and artistic account of the life of Brazilian songwriter, multi-instrumentalist and virtual artist known on-line as Yoñlu. By the age of 16, Vinicius Gageiro Marques had an extensive internet following for his music and art, especially his blend of bossa nova and tropicalia (his hero was Gilberto Gil). The son of a psychoanalyst and the region’s secretary of culture, Yoñlu was a polymath, fluent in five languages, a photographer and a self-taught music critic who published on numerous websites with friends and followers on all continents. Obsessively recording and blogging from his bedroom the connected online world he lived in accentuated the disconnection he felt in real life.

A man is tormented by the knowledge that he carries a gene that means he will go mad and, like his father, end up in a mental hospital. He refuses to have children with his long-suffering wife and seems incapable of making a commitment of any kind: even work as a dog-sitter is beyond him. Broke, he and his wife enlist in a state-run psychological experiment which is paid, but ominous and manipulative. To remain in the programme he has to make up stories and act as if he is crazy. But he can’t sustain it, and an emotional crisis forces him to seek complete freedom in nature.

This story about the vastly gifted ballet dancer Carlos Acosta and his boyhood in the poor quarters of Havana, Cuba has been nominated for Best Film, Feature, Screenplay and Cinematography awards at a host of festivals. Preternaturally brilliant, Acosta just wanted to be like the other kids, and when offered the opportunity to perform overseas was “the only Cuban who wanted to stay in Cuba”. Forced and even beaten by his father into pursuing his craft, he went on to become the UK Royal Ballet’s first black dancer. This is a treat for lovers of ballet, and dance of all sorts, and is an inspiring story in itself, with dazzling dance scenes and an emotional recapturing of Acosta’s boyhood, and his overcoming of racism and bigotry.