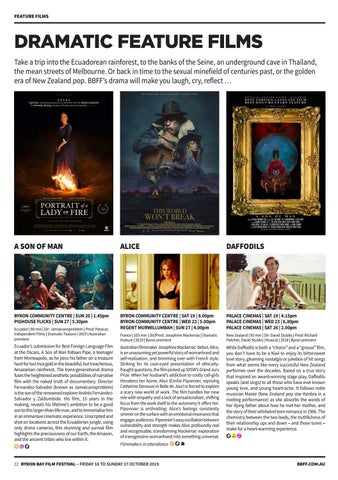 DRAMATIC FEATURE FILMS Take a trip into the Ecuadorean rainforest, to the banks of the Seine, an underground cave in Thailand, the mean streets of Melbourne. Or back in time to the sexual minefield of centuries past, or the golden era of New Zealand pop. BBFF’s drama will make you laugh, cry, reflect …

A SON OF MAN

Australian filmmaker Josephine Mackerras’ debut, Alice, is an unassuming yet powerful story of womanhood and self-realisation, and brimming over with French style. Striking for its cool-eyed presentation of ethicallyfraught questions, the film picked up SXSW’s Grand Jury Prize. When her husband’s addiction to costly call-girls threatens her home, Alice (Emilie Piponnier, reprising Catherine Deneuve in Belle de Jour) is forced to explore a scary new world of work. The film handles her new role with empathy and a lack of sensationalism, shifting focus from the work itself to the autonomy it offers her. Piponnier is enthralling: Alice’s feelings constantly simmer on the surface with an emotional resonance that engages audiences. Piponnier’s easy oscillation between vulnerability and strength makes Alice profoundly real and recognisable, transforming Mackerras’ exploration of transgressive womanhood into something universal.

While Daffodils is both a “choice” and a “grouse” film, you don’t have to be a Kiwi to enjoy its bittersweet love story, gleaming nostalgia or jukebox of hit songs from what seems like every successful New Zealand performer over the decades. Based on a true story that inspired an award-winning stage play, Daffodils speaks (and sings) to all those who have ever known young love, and young heart-ache. It follows indie musician Maisie (New Zealand pop star Kimbra in a riveting performance) as she absorbs the words of her dying father about how he met her mother, and the story of their whirlwind teen romance in 1966. The chemistry between the two leads, the truthfulness of their relationship ups and down – and those tunes – make for a heart-warming experience.

Ecuador’s submission for Best Foreign Language Film at the Oscars, A Son of Man follows Pipe, a teenager from Minneapolis, as he joins his father on a treasure hunt for lost Inca gold in the beautiful, but treacherous, Amazonian rainforest. The trans-generational drama fuses the heightened aesthetic possibilities of narrative film with the naked truth of documentary. Director Fernandez-Salvador (known as Jamaicanoproblem) is the son of the renowned explorer Andrés FernándezSalvador y Zaldumbide. His film, 10 years in the making, reveals his lifetime’s ambition to be a good son to this larger-than-life man, and to immortalise him in an immersive cinematic experience. Unscripted and shot on locations across the Ecuadorian jungle, using only drone cameras, this stunning and surreal film highlights the preciousness of our Earth, the Amazon, and the ancient tribes who live within it.