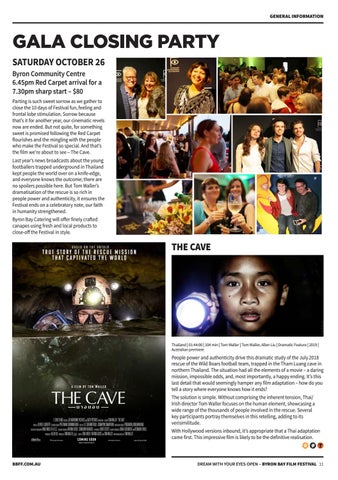 Parting is such sweet sorrow as we gather to close the 10 days of Festival fun, feeling and frontal lobe stimulation. Sorrow because that’s it for another year, our cinematic revels now are ended. But not quite, for something sweet is promised following the Red Carpet flourishes and the mingling with the people who make the Festival so special. And that’s the film we’re about to see – The Cave. Last year’s news broadcasts about the young footballers trapped underground in Thailand kept people the world over on a knife-edge, and everyone knows the outcome; there are no spoilers possible here. But Tom Waller’s dramatisation of the rescue is so rich in people power and authenticity, it ensures the Festival ends on a celebratory note, our faith in humanity strengthened. Byron Bay Catering will offer finely crafted canapes using fresh and local products to close-off the Festival in style.

People power and authenticity drive this dramatic study of the July 2018 rescue of the Wild Boars football team, trapped in the Tham Luang cave in northern Thailand. The situation had all the elements of a movie – a daring mission, impossible odds, and, most importantly, a happy ending. It’s this last detail that would seemingly hamper any film adaptation – how do you tell a story where everyone knows how it ends? The solution is simple. Without comprising the inherent tension, Thai/ Irish director Tom Waller focuses on the human element, showcasing a wide range of the thousands of people involved in the rescue. Several key participants portray themselves in this retelling, adding to its verisimilitude. With Hollywood versions inbound, it’s appropriate that a Thai adaptation came first. This impressive film is likely to be the definitive realisation.