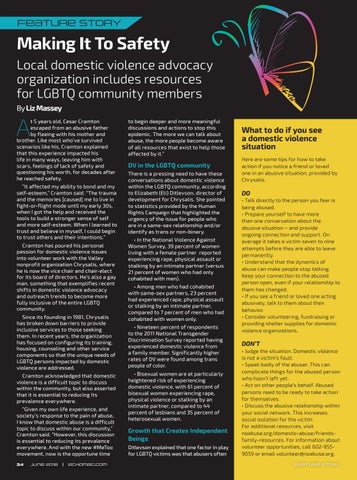 t 5 years old, Cesar Cramton escaped from an abusive father by fleeing with his mother and brother. Like most who’ve survived scenarios like his, Cramton explained that this experience impacted his life in many ways, leaving him with scars, feelings of lack of safety and questioning his worth, for decades after he reached safety. “It affected my ability to bond and my self-esteem,” Cramton said. “The trauma and the memories [caused] me to live in fight-or-flight mode until my early 30s, when I got the help and received the tools to build a stronger sense of self and more self-esteem. When I learned to trust and believe in myself, I could begin to trust others and their intentions.” Cramton has poured his personal passion for domestic violence issues into volunteer work with the Valley nonprofit organization Chrysalis, where he is now the vice chair and chair-elect for its board of directors. He’s also a gay man, something that exemplifies recent shifts in domestic violence advocacy and outreach trends to become more fully inclusive of the entire LGBTQ community. Since its founding in 1981, Chrysalis has broken down barriers to provide inclusive services to those seeking them. In recent years, the organization has focused on configuring its training, housing, counseling and other service components so that the unique needs of LGBTQ persons impacted by domestic violence are addressed. Cramton acknowledged that domestic violence is a difficult topic to discuss within the community, but also asserted that it is essential to reducing its prevalence everywhere. “Given my own life experience, and society’s response to the pain of abuse, I know that domestic abuse is a difficult topic to discuss within our community,” Cramton said. “However, this discussion is essential to reducing its prevalence everywhere. And with the new #MeToo movement, now is the opportune time

to begin deeper and more meaningful discussions and actions to stop this epidemic. The more we can talk about abuse, the more people become aware of all resources that exist to help those affected by it.”

What to do if you see a domestic violence situation Here are some tips for how to take action if you notice a friend or loved one in an abusive situation, provided by Chrysalis.

DO • Talk directly to the person you fear is being abused. • Prepare yourself to have more than one conversation about the abusive situation – and provide ongoing connection and support. On average it takes a victim seven to nine attempts before they are able to leave permanently. • Understand that the dynamics of abuse can make people stop talking. Keep your connection to the abused person open, even if your relationship to them has changed. • If you see a friend or loved one acting abusively, talk to them about their behavior. • Consider volunteering, fundraising or providing shelter supplies for domestic violence organizations.

DON’T • Judge the situation. Domestic violence is not a victim’s fault. • Speak badly of the abuser. This can complicate things for the abused person who hasn’t left yet. • Act on other people’s behalf. Abused persons need to be ready to take action for themselves. • Discuss the abusive relationship within your social network. This increases social isolation for the victim. For additional resources, visit noabuse.org/domestic-abuse/friendsfamily-resources. For information about volunteer opportunities, call 602-9559059 or email volunteer@noabuse.org. Feature Story 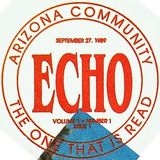