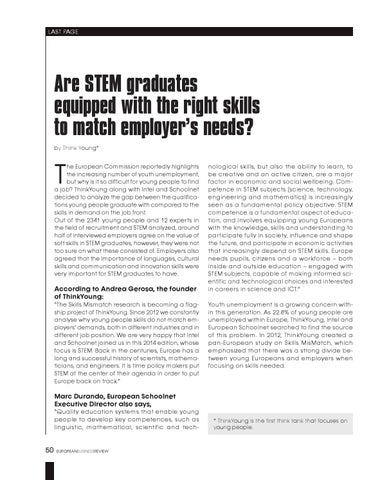 Are STEM graduates equipped with the right skills to match employer’s needs? by Think Young*

he European Commission reportedly highlights the increasing number of youth unemployment, but why is it so difficult for young people to find a job? ThinkYoung along with Intel and Schoolnet decided to analyze the gap between the qualifications young people graduate with compared to the skills in demand on the job front. Out of the 2341 young people and 12 experts in the field of recruitment and STEM analyzed, around half of interviewed employers agree on the value of soft skills in STEM graduates, however, they were not too sure on what these consisted of. Employers also agreed that the importance of languages, cultural skills and communication and innovation skills were very important for STEM graduates to have.

According to Andrea Gerosa, the founder of ThinkYoung: “The Skills Mismatch research is becoming a flagship project of ThinkYoung. Since 2012 we constantly analyse why young people skills do not match employers’ demands, both in different industries and in different job position. We are very happy that Intel and Schoolnet joined us in this 2014 edition, whose focus is STEM. Back in the centuries, Europe has a long and successful history of scientists, mathematicians, and engineers. It is time policy makers put STEM at the center of their agenda in order to put Europe back on track.”

nological skills, but also the ability to learn, to be creative and an active citizen, are a major factor in economic and social wellbeing. Competence in STEM subjects (science, technology, engineering and mathematics) is increasingly seen as a fundamental policy objective. STEM competence is a fundamental aspect of education, and involves equipping young Europeans with the knowledge, skills and understanding to participate fully in society, influence and shape the future, and participate in economic activities that increasingly depend on STEM skills. Europe needs pupils, citizens and a workforce – both inside and outside education – engaged with STEM subjects, capable of making informed scientific and technological choices and interested in careers in science and ICT.” Youth unemployment is a growing concern within this generation. As 22.8% of young people are unemployed within Europe, ThinkYoung, Intel and European Schoolnet searched to find the source of this problem. In 2012, ThinkYoung created a pan-European study on Skills MisMatch, which emphasized that there was a strong divide between young Europeans and employers when focusing on skills needed.

* ThinkYoung is the first think tank that focuses on young people. 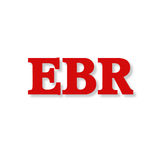