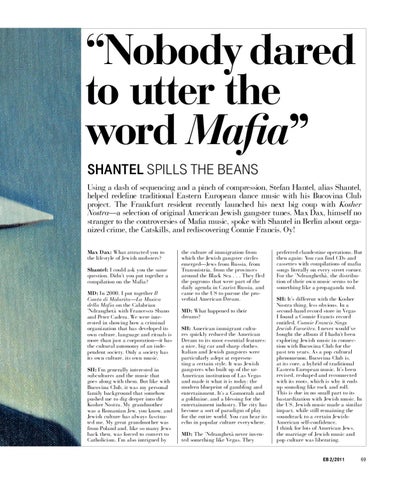 “Nobody dared to utter the word Mafia” Shantel SPILLS the beans Using a dash of sequencing and a pinch of compression, Stefan Hantel, alias Shantel, helped redefine traditional Eastern European dance music with his Bucovina Club project. The Frankfurt resident recently launched his next big coup with Kosher Nostra—a selection of original American Jewish gangster tunes. Max Dax, himself no stranger to the controversies of Mafia music, spoke with Shantel in Berlin about organized crime, the Catskills, and rediscovering Connie Francis. Oy! Max Dax: What attracted you to the lifestyle of Jewish mobsters? Shantel: I could ask you the same question. Didn’t you put together a compilation on the Mafia? MD: In 2000, I put together Il Canto di Malavita—La Musica della Mafia on the Calabrian ’Ndranghetà with Francesco Sbano and Peter Cadera. We were interested in showing how a criminal organization that has developed its own culture, language and rituals is more than just a corporation—it has the cultural autonomy of an independent society. Only a society has its own culture, its own music. SH: I’m generally interested in subcultures and the music that goes along with them. But like with Bucovina Club, it was my personal family background that somehow pushed me to dig deeper into the Kosher Nostra. My grandmother was a Romanian Jew, you know, and Jewish culture has always fascinated me. My great grandmother was from Poland and, like so many Jews back then, was forced to convert to Catholicism. I’m also intrigued by

the culture of immigration from which the Jewish gangster circles emerged—Jews from Russia, from Transnistria, from the provinces around the Black Sea . . . They fled the pogroms that were part of the daily agenda in Czarist Russia, and came to the US to pursue the proverbial American Dream. MD: What happened to their dreams? SH: American immigrant cultures quickly reduced the American Dream to its most essential features: a nice, big car and sharp clothes. Italian and Jewish gangsters were particularly adept at representing a certain style. It was Jewish gangsters who built up of the urAmerican institution of Las Vegas and made it what it is today: the modern blueprint of gambling and entertainment. It’s a Gomorrah and a goldmine, and a blessing for the entertainment industry. The city has become a sort of paradigm of play for the entire world. You can hear its echo in popular culture everywhere. MD: The ’Ndranghetà never invented something like Vegas. They

preferred clandestine operations. But then again: You can find CDs and cassettes with compilations of mafia songs literally on every street corner. For the ’Ndranghethà, the distribution of their own music seems to be something like a propaganda tool. SH: It’s different with the Kosher Nostra thing, less obvious. In a second-hand record store in Vegas I found a Connie Francis record entitled, Connie Francis Sings Jewish Favorites. I never would’ve bought the album if I hadn’t been exploring Jewish music in connection with Bucovina Club for the past ten years. As a pop cultural phenomenon, Bucovina Club is, at its core, a hybrid of traditional Eastern European music. It’s been revised, reshaped and reconnected with its roots, which is why it ends up sounding like rock and roll. This is due in no small part to its bastardization with Jewish music. In the US, Jewish music made a similar impact, while still remaining the soundtrack to a certain JewishAmerican self-confidence. I think for lots of American Jews, the marriage of Jewish music and pop culture was liberating. 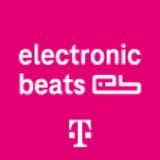