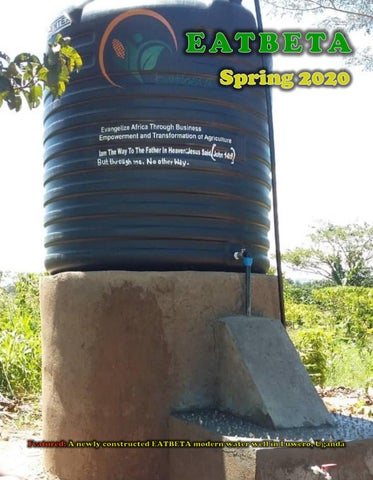 Plan to join us for EATBETA Summer 2020 Mission

Cucumbers in Naibowa Village! A rural farmer has reaped from an EATBETA seed donation (p.5)

Modern Water Wells: EATBETA has introduced modern water wells to Ugandan rural areas Availing Ugandan rural areas with clean water is a critical part of EATBETA’s mission—to transform rural livelihoods by alleviating unemployment, food and water shortages. Our goal is to construct more water wells, particularly in the villages where EATBETA carries out training and outreach programs. Since 2018, EATBETA has spearheaded providing clean and disease-free water to Ugandan rural areas. The emphasis has been on constructing the “borehole” type of water wells (similar to the one shown below on the left), because they work very well in those areas with a consistent water table. However, in areas where the water table is inconsistent, “modern” water wells (similar to the one shown below on the right) have been found to be more reliable because a water tank is provided in place of a hand pump to store and conserve water. A motorized generator pumps water into the tank and then villagers draw water from the tank via a faucet; this guarantees access to water even during seasons when the water table is very low. To minimize the cost of constructing either type of water well, borehole or modern, the villagers are actively involved in hand-digging the water hole.

Cucumbers in Naibowa Village! A rural farmer has reaped from an EATBETA seed donation To improve crop production, it is important that rural farmers have access to quality seeds. However, due to lack of funds and the inability to save seeds from the usually meager crop harvests, Ugandan peasant farmers often struggle to acquire enough seeds. As a result, entire farming seasons may pass without meaningful and productive agricultural activity—hence perpetuating the vicious cycle of rural unemployment and food shortages. EATBETA’s goal is to supply and donate quality seeds to rural peasant farmers so as to help boost crop production, and to teach them how to properly sow, harvest, and preserve seeds, with a long-run motive to avoid seed shortage and to guarantee ongoing crop farming activities every agricultural season. Recently, EATBETA donated cucumber seeds to a rural farmer—Charles Basalirwa of Naibowa village in Kamuli district. EATBETA also taught Charles how to grow and harvest cucumbers. At a follow up visit by EATBETA’s team, Charles excitedly showed off his cucumber crops and he informed the team about his plans to harvest soon and sell to hotels and restaurants in Kampala, Uganda’s capital city, where the market for produce and food crops is readily available. He plans to preserve and save a good amount of seeds from his first harvest and sow during the next farming season. Charles’ success story is a tangible testimony that EATBETA is indeed helping to transform rural livelihoods.

EATBETA’s work in Uganda was recently recognized and featured in MissionBox's Fall 2019 Impact Edition. MissionBox is a premier online knowledge and connection hub for nonprofits and charities from around the world. It is a great privilege and opportunity for EATBETA to be featured by MissionBox. “EATBETA is focused on tackling rural unemployment, food and water shortage problems in sub-Saharan Africa while empowering rural farmers with practical skills ...” You can access and read the full news article via the following website link: https://www.missionbox.com/article/2229/mission-success-eatbeta-international-foundation

During EATBETA’s Summer 2019 mission in Uganda, training workshops were conducted at three different rural locations which included Kiteezi village in Wakiso district. Bendegere village in Nakaseke district, and Butabala village in Kamuli district. The summer’s training theme was “Farming as a Business,” and Cooperatives was one of the topics presented. By working together, rural farmers can readily access better prices and markets for their farm harvests, and as a larger organized group farmers are enabled to solicit sizable funding for things like seeds, farm equipment, crop processing, harvest storage, and crop transportation, which often require considerable capital. EATBETA’s goal is to promote the importance of Cooperatives and to be an advocacy for creating and establishing cohesive cooperatives among rural farmers. On December 8, 2019, we received exciting news that the rural farmers at Bendegere village, who participated in EATBETA’s Summer 2019 training, had formed a Cooperative. Pastor John Makubuya, the chief mobilizer, said, “We began with growing food for our animals and the next plan is to construct a structure for our animals.” EATBETA is committed to working alongside the newly formed Cooperative and it is our prayer that this initiative will become a model for other Ugandan rural regions. 7

EATBETA Summer 2020 Mission: Inviting volunteers for EATBETA Summer 2020 Mission This is an opportunity of a lifetime! Enjoy a summer trip to Africa as you volunteer your skills to train and reach out to rural communities. The summer 2020 mission is scheduled to take place from July 27 through August 7, 2020 in Uganda. If you are not personally able to go, we kindly welcome you to financially support other volunteers who are able to go.

Purpose The mission of EATBETA is to transform rural livelihoods by alleviating unemployment, food and water shortages in Uganda and across sub-Saharan Africa. In order to pursue and achieve this mission, EATBETA relies primarily on volunteers who are willing to go to Uganda and get involved in training and outreach with rural communities. We need volunteers from various fields and professional backgrounds (agriculture, business, medical, faith-based, construction, etc.). When we carry out mission programs in a rural community, every skill set is needed to bring about a holistic impact in that community. Cost The cost per person is $3,000 and the breakdown is as follows: • Mission Registration Fee: $250 • Airfare (Return ticket): $1,750 • Entry Visa (East Africa): $100 • Travel Insurance ($5 x 12 days): $60 • Accommodation ($50 x 12 days): $600 • Meals ($20 x 12 days): $240 For more details about EATBETA Summer 2020 Mission, and to register, please visit www.eatbeta.org/summer2020 8

Demo-Center Project To effectively pursue EATBETAâ&#x20AC;&#x2122;s mission, we plan to construct a training Demo-Center this year (2020). In the past, since training sessions in EATBETA's summer missions in Uganda were scattered across the country, trainers often spent an average of 4-5 hours per day just traveling. This exhausted the trainers and limited the number of rural farmers they could train, minimizing the total benefit derived from the training programs. We have determined that it would be more effective (in terms of cost and time) to have the training programs carried out at a central location and settingâ&#x20AC;&#x201D;similar to the model shown in the picture below. The Demo-Center is expected to sustain itself through income generated from the various activities that will be conducted on site. We humbly invite you to support the Demo-Center project; your financial donation towards this noble cause would be much appreciated.

Get Involved You can get involved with ETABTEA in various ways including donating, partnering, or volunteering. For a additional information on how you can get involved, please visit www.eatbeta.org/involved EATBETA International Foundation is a nonprofit 501(c)(3) organization 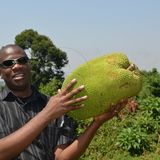 The Spring 2020 Newsletter features exciting news and updates from EATBETA. It highlights the introduction of modern water wells to Ugandan...

The Spring 2020 Newsletter features exciting news and updates from EATBETA. It highlights the introduction of modern water wells to Ugandan...