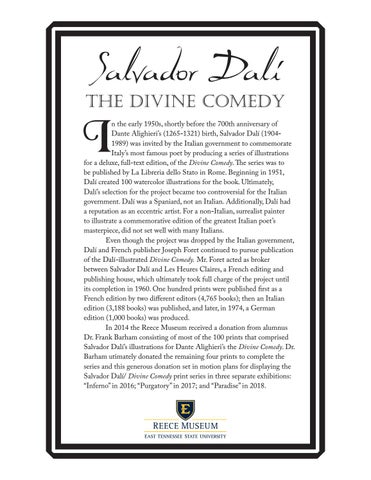 n the early 1950s, shortly before the 700th anniversary of Dante Alighieri’s (1265-1321) birth, Salvador Dalí (19041989) was invited by the Italian government to commemorate Italy’s most famous poet by producing a series of illustrations for a deluxe, full-text edition, of the Divine Comedy. The series was to be published by La Libreria dello Stato in Rome. Beginning in 1951, Dalí created 100 watercolor illustrations for the book. Ultimately, Dalí’s selection for the project became too controversial for the Italian government. Dalí was a Spaniard, not an Italian. Additionally, Dalí had a reputation as an eccentric artist. For a non-Italian, surrealist painter to illustrate a commemorative edition of the greatest Italian poet’s masterpiece, did not set well with many Italians. Even though the project was dropped by the Italian government, Dalí and French publisher Joseph Foret continued to pursue publication of the Dalí-illustrated Divine Comedy. Mr. Foret acted as broker between Salvador Dalí and Les Heures Claires, a French editing and publishing house, which ultimately took full charge of the project until its completion in 1960. One hundred prints were published first as a French edition by two different editors (4,765 books); then an Italian edition (3,188 books) was published, and later, in 1974, a German edition (1,000 books) was produced. In 2014 the Reece Museum received a donation from alumnus Dr. Frank Barham consisting of most of the 100 prints that comprised Salvador Dalí’s illustrations for Dante Alighieri’s the Divine Comedy. Dr. Barham utimately donated the remaining four prints to complete the series and this generous donation set in motion plans for displaying the Salvador Dalí/ Divine Comedy print series in three separate exhibitions: “Inferno” in 2016; “Purgatory” in 2017; and “Paradise” in 2018.

The Reece Museum is located on the campus of East Tennessee State University and is free and open to the public Monday through Friday, 9am to 4:30pm. Follow the Reece Museum on social media for more content and digital programming. For more information about exhibitions or events, please visit www.etsu.edu/reece or call 423-439-4392. 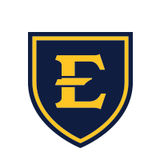