The Artist and The Engineer 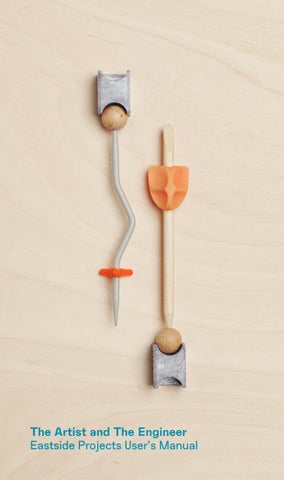 The Artist and The Engineer Eastside Projects Userâ&amp;#x20AC;&amp;#x2122;s Manual

How did it become

what it is today?

The city is shaped by The Hammer.

The Hammer’s motto is ‘Forward!’

The Hammer has two supporters. They are The Artist and The Engineer.

Each day they put the city together.

But at the end of each day, The Hammer cries ‘Forward!’

The Hammer clears away the city. He buries and flattens.

He makes a new foundation.

The Artist and The Engineer put together a new city.

One night, after The Hammer has cleared the city,

The Engineer sees something leftover.

The Artist has an idea.

The Artist and The Engineer imagine a new way of building with leftovers and layers.

Can they persuade The Hammer not to flatten the city?

The Artist says ‘We could build on top of, around, over, and through.’

The Engineer says ‘We could recycle and upcycle.’

The Engineer says ‘We could build a city with a memory.’

The Artist says ‘To do this we will need a new motto.’

The next morning they are ready to make their announcement to the city.

The new motto for the city is ‘Layered!’

Welcome to our new layered city!

A New Motto for Birmingham Notes for Users Eastside Projects is a free public gallery in Birmingham that is being imagined and organised by artists. We commission and present experimental contemporary art exhibitions and demonstrate ways in which art may be useful as part of society.

The city of Birmingham’s motto is ‘Forward’. The motto appears on the city council’s emblem — its coat of arms — which is displayed on official documents, street signs, and civic buildings. Birmingham’s original coat of arms dates from 1889. The present, revised design was introduced in 1977. An important function of a civic coat of arms is to represent significant individuals, groups and ideas in a city’s history. These symbolic images connect us to the past. Birmingham’s coat of arms shows two figures — known as ‘supporters’ — representing industry and art as the defining forces in the city’s identity. Above these characters a muscular arm raises a hammer.

The motto itself conforms to a common type in English civic heraldry, its message suggesting industrial progress. Other examples are ‘Onward’ (Fleetwood), ‘Progress’ (Blackpool) and ‘Ever Forward’ (Weston-super-Mare). These mottos are meant to express productivity and prosperity. But in the context of Birmingham’s recent history, its motto — and the representation of the hammer — reflect the city’s preoccupation with erasing layers of the urban environment to make way for new building. The construction and destruction of three public libraries around the same site in the past forty years is evidence of this tendency. ‘Forward’ has become a negative, destructive motivation. This sixth draft of Eastside Projects’ user’s manual — in the form of a story for children — describes an alternative to the cycle of urban erasure and renewal. In the iconic 1972 publication ‘Adhocism’, architectural historian Charles Jencks wrote: ‘… the environment should preserve a record of past action, so that present and future actions may become intelligible.’ In this spirit Eastside Projects proposes to initiate a new planning policy for Birmingham — informed by values of accumulation, complexity and story-telling — to make a more ‘legible’ environment.

The city records its own history.

We imagine an alternative urban landscape in which the city’s three public libraries — designed by John Chamberlain (1882), John Madin (1974) and Mecanoo (2013) — might today coexist, producing a rich portrait of the city’s history and changing values.

We introduce this new policy by proposing a new motto for Birmingham: ‘Layered’.

Eastside Projects’ gallery space at 86 Heath Mill Lane is a model of a layered environment. The gallery opened in September 2008. At the end of each temporary exhibition we recycle and upcycle its remains — these might be materials, artworks, ideas. In this way, each exhibition alters the conditions in the space, and the space records its own history, creating a legible environment that is able to express complex narratives. This process is documented in draft five of our user’s manual, available at www.eastsideprojects.org We believe art and artists could be involved at every level of the planning and operation of the city. We wish to work with others to project this policy onto the total urban environment.

The Engineer Let us tell you a story about our city of Birmingham and its motto â&amp;#x20AC;&amp;#x2DC;Forward!â&amp;#x20AC;&amp;#x2122; The Artist We hope this story will make you see the city you live in differently. The Hammer What are you two whispering about?

The Artist and The Engineer 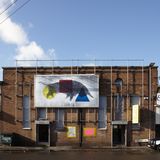