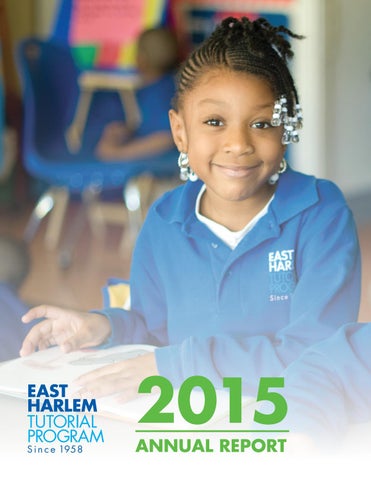 Letter from the Executive Director and Board Chair

THANK YOU TO OUR STAFF & VOLUNTEERS

OUR MISSION East Harlem Tutorial Program prepares students with the academic skills, strength of character, and emotional well-being to excel in high school and college, lead in their communities, and realize their best possible selves.

LETTER FROM THE EXECUTIVE DIRECTOR AND BOARD CHAIR Dear Friends, Every year we commit to building on what we learn and to innovating faster to do more for East Harlem. This year was no exception. We expanded and improved our core services—after-school and summer programs, East Harlem Scholars Academies, and College Scholars. We also piloted the East Harlem Teaching Residency—an innovative, accessible pathway into the teaching profession that will staff East Harlem classrooms with mission-driven, prepared educators. In November of 2014, we broke ground on an important part of EHTP’s future: the East Harlem Education Center at 2050 Second Avenue, part of our bold “Campaign for East Harlem.” For an organization that is constantly striving to do more and to do better for our community, an annual report provides an opportunity to pause and reflect. This is a moment to stop and say thank you. We could not do this work without the trust of our scholars, families, and supporters—and it’s only with your support that we continue to move forward. In gratitude,

SERVICE We embrace opportunities to help others. We appreciate and learn about our community and the world in which we live.

COURAGE We challenge ourselves to take risks, to persevere, and to question the status quo.

HUMILITY We apologize for our mistakes and seek to improve our shortcomings.

ORIGINALITY We embrace our individuality and celebrate the diversity of all others around us.

ACHIEVEMENT We expect the best of ourselves at all times. We pursue knowledge and excellence.

REFLECTION We cherish moments to step back, consider our actions, and plan for a better tomorrow.

The Residency creates a pipeline of prepared, mission-driven educators in partnership with Hunter College and AmeriCorps.

This map of Manhattan is what drives us in our work to transform outcomes for the children of East Harlem. In the blue shaded areas, residents have a high percentage of college completion, unemployment is low, and a majority of families have health insurance. For families in East Harlem (the yellow section of the map), there are broad and far-reaching consequences of living in an under­served and under-resourced community. Our goal is to turn East Harlem blue.

MOST COMMON LEVEL OF EDUCATION AMONG ADULTS 25 YEARS AND OVER

of East Harlem residents have a college degree

of East Harlem residents have not completed high school

OF K-2 SCHOLARS who were far below grade level in math in November of 2014 were at, or approaching grade level by May of 2015

COLLEGE SCHOLARS After scholars graduate from high school and matriculate to college, they stay connected to staff, mentors, and peers in our College Scholars program. The program supports students through their college experience, helping to ease the transition and overcome barriers to completion.

College Scholars are on-track to graduate at a rate

the national average for students from low-income households

continued in the field of education after they completed the program

THANK YOU TO OUR INCREDIBLE STAFF & VOLUNTEERS!

On behalf of EHTPâ&#x20AC;&#x2122;s scholars, families, Trustees, and supporters, we extend a sincere thank you to our dedicated staff and volunteers. Each day, every member of our extraordinary team arrives at work prepared to make a lasting impact on the East Harlem community through a relentless commitment to educational equity. Volunteers and staff give their time to our scholars as mentors, tutors, and teachers. Students thrive in the classroom as they work towards becoming their best possible selves. We are thankful for the impact each member of our team has made on the lives of our scholars and will continue to make in East Harlem.

THE CAMPAIGN FOR EAST HARLEM “I can relate very much to kids who grow up in a home where there aren’t a lot of educational opportunities. I want the students of East Harlem to get the same opportunities that are available to so many other kids.” - Marilyn Simons | EHTP Board Member

In 2014, EHTP launched the $45 million Campaign for East Harlem. The Campaign will help support over 2,000 scholars annually through every step of their education.

THE CHALLENGE Philanthropist and EHTP Board Member Marilyn Simons and her husband Jim have made a $15 million investment in EHTP – among the top five individual gifts awarded to New York City K-12 public education, and the largest ever to East Harlem. This gift will match public and private donations dollar-for-dollar up to $15 million.

BY THE NUMBERS BOARD OF DIRECTORS

Our Board is an integral part of the success of our programs and schools, and supports our mission in myriad ways. They fundraise, leverage their professional backgrounds to advise the organization, and have fiduciary and governing responsibility. They are actively engaged in what we do â&#x20AC;&#x201D; from participating in after-school events to hitting the court for our annual Corporate Basketball Tournament.

We are grateful for the many individuals and organizations that support our vision for East Harlem.