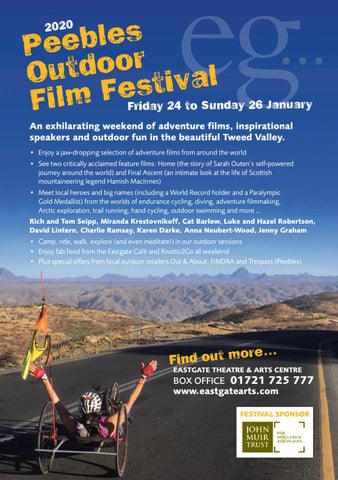 Camp, ride, walk, explore and even meditate with these brilliant outdoor sessions

with John Muir Trust 7pm Meet at Glenlude, near Traquair EH44 6PY For one night only ... a rare opportunity to enjoy a rustic overnight camp in the volunteer hut at the John Muir Trust’s Glenlude property. Depending on the weather, you might head out for a night-time walk to find owls, or stay inside to build bird and bat boxes, toast marshmallows and generally learn about the Trust’s work at Glenlude before bedding down beside the potbelly stove. Bring sleeping mat, sleeping bag and warm clothes. Snacks + breakfast included.

with Anna Neubert-Wood 8am – 9.30am Leaves from Hay Lodge Park (but meet at Neidpath Road car park, Peebles, EH45 8NN)

Saturday 25 January Ride with Rich and Tom Seipp 9am – 11am Meet at Bspoke Cycles, Peebles EH45 8BA Join father and son endurance riders, and festival speakers, Rich and 14-year-old Tom Seipp for a fantastic gravel ride during which the dynamic duo will shares stories from their many adventures together. Highly recommended for young riders eager to follow in their footsteps! Led by Bspoke Cycles (with post-ride coffee and cake from Loullabelles). Max: 12 places Age: 12+ £8, £4 under 15s

Anna Neubert-Wood will lead a mini sunrise WanderWomen experience. Enjoy a walk in nature, some meditation, perhaps some yoga, and definitely some tea from the Kelly kettle. Max: 8 places Age: 12+ (under 18s must come with responsible adult) £8, £4 under 15s

Ride with Jenny Graham + Swift Trails 9am – 11.30am Leaves from FINDRA HQ (but meet at Hall Street car park, Innerleithen EH44 6QT) Join festival speaker Jenny Graham, the fastest woman to circumnavigate the world by bike, on a rather shorter ride on some stunning Tweed Valley trails. Suitable for confident riders with good levels of fitness. Led by women’s mountain bike tuition company Swift Trails (with coffee and cake from festival sponsor FINDRA). Max: 12 places Age: 18+ £8 Important: For each of these outdoor sessions, please ensure you wear suitable clothes and footwear, and carry any extras you might need.

The Sea Around Me

Perfect for families, a delicious pick of some of the best adventure films screened since the festival began in 2015. £6, £4, adult + child £8

POFF Taster 3pm – 3.50pm Auditorium A tantalising selection of films giving a taster of each of the sessions at this year’s festival. £6, £4, adult + child £8

A session of short films that celebrate wild places on our doorstep followed, after a short interval, by an evening with author, diving and natural history presenter Miranda Krestovnikoff. Taking us on a tour of the UK and Irish coastlines, including some of the best stories she has filmed for the BBC’s COAST and The One Show, plus Channel Four’s Wreck Detectives, Miranda provides a behind-thescenes look at how the items are filmed and what happens when it all goes a bit wrong! £15, £8 under 15, adult + child £20

For the Love of It Rich and Tom Seipp 4.30pm – 5.30pm Anne Younger Studio The young star of Tom Seipp – a Mountain Journal, and already a veteran of the infamous Strathpuffer, Tom is now aged 14 and all grown up. He still loves riding bikes though and recently dragged his dad, Rich, along the Tour Divide – a 2,700-mile pedal from Alberta to New Mexico. Hear more about the trip (plus a few others) from this very special father and son team! £8, £4 under 15, adult + child £10

Auditorium Perfect for families, a delicious pick of some of the best adventure films screened since the festival began in 2015. £6, £4, adult + child £8’

Wild Skies – Return of the Golden Eagle Cat Barlow 12pm – 1pm Auditorium Using the latest footage and images, Cat Barlow from the South of Scotland Golden Eagle Project tells the story of a five-year initiative to boost numbers of the vulnerable population of golden eagles in the Borders and Dumfries &amp; Galloway.

Auditorium A session of short films exploring adventures in extraordinary locations followed, after a short interval, by an afternoon with Luke and Hazel Robertson, Explorers in Residence for the Royal Scottish Geographical Society and guides for The Polar Academy – an initiative that takes teenagers on life-changing expeditions to Greenland. Join Luke and Hazel on a journey from Antarctica to Alaska and northern Norway as they reveal their passion for connecting us with some of the world’s most remarkable places and people. £12, £6 under 15, adult + child £15

Photography Competition See the sh o the Anne rtlisted entries in Younger Studio. The winner will be announced ahead of the final session on Sunday 26 January

The latest film from Scottish director Jen Randall (Psycho Vertical, Operation Moffat) tells the story of adventurer Sarah Outen who spent four years traversing the globe, travelling by bike, kayak and rowing boat. Woven from many hours of filmed footage from the expedition, it is an intimate portrayal of a journey frequently touched by the kindness of strangers, the wonders of the wild, the savagery of the elements, near-death experiences, the demons of her emotional trauma, and Sarah’s love for her wife, Lucy.

A session of short films exploring human endurance followed by an evening with a true one-of-a-kind adventurer. Paralysed from the chest down following a climbing accident aged 21, Karen Darke’s current Quest79 project – nine rides on seven continents to raise money for the Spinal Injuries Association – has already seen her claim a hand cycling gold medal at the 2016 Paralympic Games, shatter the women’s hand cycle land speed record in Nevada, and ride along the Ganges from its source in the Himalayas. Find out more about these and other remarkable tales from one of the world’s most inspirational (and down to earth) endurance athletes.

Auditorium Perfect for families, a delicious pick of some of the best adventure films screened since the festival began in 2015. £6, £4, adult + child £8

Auditorium A session of short films covering journeys from around the world followed, after a short interval, by an afternoon with The Adventure Syndicate’s Jenny Graham. In 2018 she rode her way into the Guinness Book of World Records by becoming the fastest woman to circumnavigate the world by bike. Completing her ride solo and unsupported she covered 18,000 miles in just 124 days, knocking almost three weeks off the previous (supported) record. From dodging tornados and negotiating bear country to dealing with Russian traffic and more, Jenny offers a humorous take on the highs and lows of one very big adventure. £12, £6 under 15, adult + child £15

Final Ascent: The Legend of Hamish MacInnes Feature Film 6pm – 7.20pm Auditorium The legend of Hamish MacInnes began early. At 16, he climbed the Matterhorn. He attempted Everest in 1953 with his friend Johnny Cunningham, and almost stole the peak before Hillary and Tenzing. As an explorer, expedition leader and engineer he achieved world fame while, as inventor of the all-metal ice axe, author of the International Mountain Rescue Handbook and founder of Glencoe Mountain Rescue, he has been responsible for saving thousands of lives. But at the age of 84, his accomplishments could not save him from being institutionalised against his will – later emerging from hospital to find his memory gone. This film tells the story of his life by mirroring his greatest challenge: to recover his memories and rescue himself. £9, £6, adult + child £13

An exhilarating weekend of adventure films, inspirational speakers and outdoor fun in the beautiful Tweed Valley.