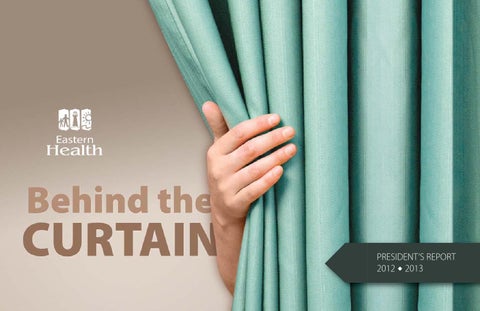 A Message from the President and CEO Health care from birth until death…and everything in between. It’s known as the full continuum of care. Unless you’re a part of it, few people can imagine the scope and intensity of what happens inside a large health care system on a daily basis. At Eastern Health, we are a community of 13,000 individuals with a single focus: to provide the best health care possible to those we serve. The medical curtain is a familiar symbol that suggests targeted, respectful care of our patients, residents and clients. It represents a myriad of one-on-one treatments and procedures that, by extension, are relevant to all those we serve and the public at large. Providing access ‘behind the curtain’ also represents our accountability to be open about our approach to health care and use of resources. As the province’s largest health authority, Eastern Health serves 290,000 men, women and children in the eastern

“Providing access ‘behind the curtain’ also represents our accountability to be open about our approach to health care and use of resources.”

region, and everyone in Newfoundland and Labrador, when it comes to specialized services such as cancer care, cardiac care, mental health and addictions and children’s and women’s health.

These priorities are outlined in more detail in Together, We Can, our strategic plan 2011-2014. This year’s annual report provides detail on our progress to date and can be found on our website at www.easternhealth.ca.

Did you know, for example, that in the last ﬁscal year we:

We take what we do very seriously. We deal with life and death on a daily basis, and our staﬀ and physicians approach both with skill and compassion. Every one of our statistics represents a human being who deserves no less, and looks to us for care that is characterized by excellence, respect, integrity and fairness.

facilitated a total of 1,654,885 encounters with the public?

This report oﬀers our stakeholders a ‘behind the scenes’ glimpse into the daily operations of programs and services which embody our strategic priorities of quality and safety and increased access. In turn, these initiatives result in improvements to the health of whole populations and ensure sustainability to the essential services we provide at Eastern Health.

Together, that is what we strive for. Pull back the curtain and see for yourself!

Our Strategic Priorities Quality and Safety: A Renewed Commitment

Sustainability: Making the Best Use of Resources

Screen Saver Newfoundland and Labrador Colon Cancer Screening Program It’s painless, proactive and done in the privacy of your own home. It could also save your life. The Fecal Immunochemical Test (FIT) kit is a home screening test for colon cancer, the second leading cause of death from cancer in Newfoundland and Labrador. Colon cancer develops with few, if any, warning signs. There is no single cause but there are risk factors. Some, such as diet, are within our control. Other risk factors, such as age, are not within our control, particularly among those over 50 years of age.

Enter the Newfoundland and Labrador Colon Cancer Screening Program which was introduced in western Newfoundland in July 2012. In the ﬁrst year of operation, approximately 68 per cent of all kits that Eastern Health mailed to clients were returned. This tremendous response speaks to the value clients place on the importance of population health. In June 2013, the program expanded to central Newfoundland, as part of the provincial government’s plan to oﬀer provincewide screening by 2015. Screening is free, voluntary and casts a wide net: it covers the general population of men and women between 50-74 years of age, who are considered at average risk for colon cancer – or who may not feel they are at risk at all.

Screening can stop that worst-case scenario in its tracks! If detected early, about 90 per cent of colon cancers can be prevented or treated successfully. Taking a home screening kit also means taking control of your own health, in partnership with health care providers. Home screening represents a very eﬀective way to detect colon cancer early on - and in the greatest number of people. Taking a few minutes now could save your life. Think of FIT as your personal ‘screen saver!’

About 90 per cent of colon cancers can be prevented or treated successfully.

Safety Shield Long-Term Care’s Hands-on Approach to Hygiene The strength of eﬀective health care begins and ends with the hands that provide it. The hands of the health care provider perform surgery, treat wounds, insert tubes, administer eye drops, measure pulse rates and wash bodies from head to toe. Other than a pair of sterile gloves during some procedures, nothing comes between a health care provider’s hands – and the patient, client or resident being cared for. Nothing that is, except hand hygiene. Proper hand hygiene – either with soap and water or alcohol-based hand rubs – is the most

eﬀective way to prevent the spread of infection and communicable disease from one person to another. Staﬀ at Eastern Health’s nursing homes in the Long-Term Care Program scored the highest results in a 2012 Hand Hygiene Audit. The majority of the longterm care facilities increased compliance over the 2011 audit, with four of them meeting or exceeding an 80 per cent compliance rate – a direct result of the priority placed on hand hygiene and ongoing eﬀorts among managers and staﬀ to improve compliance. Long-term care employees are very aware of what infection can mean to their residents who are already compromised with other, underlying health conditions.

Hand hygiene acts as a shield between harmful microorganisms and their targets: vulnerable men and women. It also protects employees, families and visitors. Hand hygiene is in everyone’s best interest – and there are no shortcuts to quality and safety. Neither is status quo an option in health care. Excellence is always the goal. Encouraged by their improved compliance, the staﬀ in long-term care has already set a target of 100 per cent for the next hand hygiene audit. As they continue to serve and protect their residents, they say next time they’re ‘going for the gold!’

Hand hygiene acts as a shield between harmful micro-organisms and their targets: vulnerable men and women.

Began implementation of Safe Surgery Checklist to ensure the OR team is involved in safety communication at three critical points: before anesthesia, before skin incision, and before patient leaves operating room. It is based on a World Health Organization campaign.

Through the Looking Glass A Neonatal Wonderland They are tiny and vulnerable and to survive, they need shelter in the safest of environments - and highly specialized care. They are the patients of NICU – Eastern Health’s Neonatal Intensive Care Unit at the Janeway Children’s Health and Rehabilitation Centre. They come from all over Newfoundland and Labrador. Many of these ‘neonates’ are premature, some have experienced complications during delivery, others are born with heart or breathing issues. Their ﬁrst homes are inside the plexi-glass walls of an incubator. Outside, dozens of highly-

trained nurses stand ready to provide specialized, critical care of their tiny charges until they can be released into the care of their parents. Their instinct for survival is extraordinary; their recoveries often seem miraculous. To sustain this specialized care 24/7 at the Janeway, NICU nurses have received specialized and ongoing training in the critical (ventilator) care that many of these infants require. In the past, the critical care unit was separate from the nursery for babies who weren’t so sick, and nursing staﬀs from both the NICU and the Pediatric Intensive Care Unit (PICU) were trained separately. But when both services amalgamated at the Janeway Children`s Health and Rehabilitation Centre, so did the nursing staﬀ. All full-time nurses have now been cross-trained to provide both

levels of care, and training is ongoing with new hires and parttime staﬀ. The nursing staﬀ is now well-positioned to meet the ongoing demand, eliminating the need to occasionally send babies outside of the province for the specialized care they can receive here. Now they remain close to home. In a climate-controlled environment, often sustained by life-giving oxygen, intravenous lines and feeding tubes, their tiny glass homes are surrounded by personal mementos: family photos, music boxes and framed pictures of their own footprints. Most important of all, they remain connected to their families who eagerly wait to give them their ﬁrst cuddle, ﬁrst feeding or ﬁrst bath. As one nurse puts it, “Giving families what they want – seeing the babies’ health improve and being able to place them in their mother’s arms for the ﬁrst time – it’s the best feeling in the world!”

All full-time nurses have now been cross-trained to provide both levels of care.

Launched operational improvement initiatives to be implemented over a two-year period to save $43 million and reduce 550 full-time equivalents (FTEs) through attrition.

Achieved Ontario Laboratory Association (OLA) accreditation for all laboratories. The accreditation is based on International Standards Organization (ISO) criteria and fulďŹ lls a recommendation of the Cameron Commission of Inquiry on Hormone Receptor Testing.

eRecruit: Human Resources Client Services introduced an online job board to streamline the application process for its users and reduce recruitment turnaround times.

Palliative Care Enhancements Quality of life at the end of life. That is the goal of Eastern Health’s Palliative Care Services. Palliative care has two objectives: to relieve suﬀering and to improve the quality of living of all people – of all ages – who have a life-limiting condition. Its guiding principle: to provide that care with respect and compassion. Palliative care has become an integral part of our overall approach to health care and is provided by teams of professionals in our communities,

hospitals, long-term care facilities and designated palliative care units. As of the last ﬁscal year, 153 health care providers throughout the Eastern Health region had enhanced their skills in end-of-life care through nationallyrecognized training known as Learning Essential Approach to Palliative Care (LEAP). These nurses, physicians, social workers and pastoral care workers are based in a variety of settings: community, acute, long-term care and palliative care…rural and urban. Many people now choose to die at home, in their own community. The LEAP training has increased access throughout the eastern region to knowledgeable, skilled and consistent care for those at the end of life, wherever that may happen.

A new Palliative Care Patient Navigator will also ease the journey of palliative care patients and their families by connecting them directly to the care they need around the region. Eastern Health provides health care from birth to death. No point along this ‘continuum of care’ is any more – or less – important than any other. The growth of the Palliative Care Services reﬂects the attention and honour aﬀorded to all those we serve – from admission to ‘ﬁnal discharge.’

The growth of the Palliative Care Services reﬂects the attention and honour aﬀorded to all those we serve.

Medicine Program implemented non-physician clinics for HIV – successfully eliminating the waiting list, an approach which has received positive evaluations from physicians, patients and the interdisciplinary team. 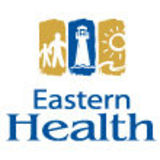