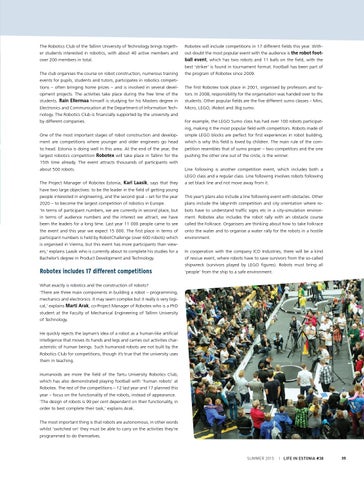 The Robotics Club of the Tallinn University of Technology brings together students interested in robotics, with about 40 active members and over 200 members in total. The club organises the course on robot construction, numerous training events for pupils, students and tutors, participates in robotics competitions – often bringing home prizes – and is involved in several development projects. The activities take place during the free time of the students. Rain Ellermaa himself is studying for his Masters degree in Electronics and Communication at the Department of Information Technology. The Robotics Club is financially supported by the university and by different companies. One of the most important stages of robot construction and development are competitions where younger and older engineers go head to head. Estonia is doing well in this area. At the end of the year, the largest robotics competition Robotex will take place in Tallinn for the 15th time already. The event attracts thousands of participants with about 500 robots. The Project Manager of Robotex Estonia, Karl Laasik, says that they have two large objectives: to be the leader in the field of getting young people interested in engineering, and the second goal – set for the year 2020 – to become the largest competition of robotics in Europe. ‘In terms of participant numbers, we are currently in second place, but in terms of audience numbers and the interest we attract, we have been the leaders for a long time. Last year 11 000 people came to see the event and this year we expect 15 000. The first place in terms of participant numbers is held by RobotChallenge (over 600 robots) which is organised in Vienna, but this event has more participants than viewers,’ explains Laasik who is currently about to complete his studies for a Bachelor’s degree in Product Development and Technology.

Robotex will include competitions in 17 different fields this year. Without doubt the most popular event with the audience is the robot football event, which has two robots and 11 balls on the field, with the best ‘striker’ is found in tournament format. Football has been part of the program of Robotex since 2009. The first Robotex took place in 2001, organised by professors and tutors. In 2008, responsibility for the organisation was handed over to the students. Other popular fields are the five different sumo classes – Mini, Micro, LEGO, iRobot and 3kg sumo. For example, the LEGO Sumo class has had over 100 robots participating, making it the most popular field with competitors. Robots made of simple LEGO blocks are perfect for first experiences in robot building, which is why this field is loved by children. The main rule of the competition resembles that of sumo proper – two competitors and the one pushing the other one out of the circle, is the winner. Line following is another competition event, which includes both a LEGO class and a regular class. Line following involves robots following a set black line and not move away from it. This year’s plans also include a line following event with obstacles. Other plans include the labyrinth competition and city orientation where robots have to understand traffic signs etc in a city-simulation environment. Robotex also includes the robot rally with an obstacle course called the Folkrace. Organisers are thinking about how to take Folkrace onto the water and to organise a water rally for the robots in a hostile environment. In cooperation with the company ICD Industries, there will be a kind of rescue event, where robots have to save survivors from the so-called shipwreck (survivors played by LEGO figures). Robots must bring all ‘people’ from the ship to a safe environment.

What exactly is robotics and the construction of robots? ‘There are three main components in building a robot – programming, mechanics and electronics. It may seem complex but it really is very logical,’ explains Marti Arak, co-Project Manager of Robotex who is a PhD student at the Faculty of Mechanical Engineering of Tallinn University of Technology. He quickly rejects the layman’s idea of a robot as a human-like artificial intelligence that moves its hands and legs and carries out activities characteristic of human beings. Such humanoid robots are not built by the Robotics Club for competitions, though it’s true that the university uses them in teaching. Humanoids are more the field of the Tartu University Robotics Club, which has also demonstrated playing football with ‘human robots’ at Robotex. The rest of the competitions – 12 last year and 17 planned this year – focus on the functionality of the robots, instead of appearance. ‘The design of robots is 99 per cent dependent on their functionality, in order to best complete their task,’ explains Arak. The most important thing is that robots are autonomous, in other words whilst ‘switched on’ they must be able to carry on the activities they’re programmed to do themselves. 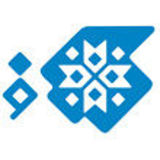