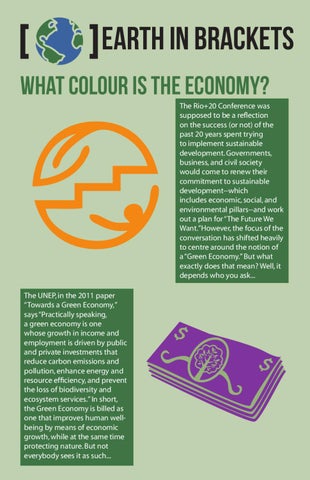 Earth In Brackets What colour is the economy? The Rio+20 Conference was supposed to be a reflection on the success (or not) of the past 20 years spent trying to implement sustainable development. Governments, business, and civil society would come to renew their commitment to sustainable development--which includes economic, social, and environmental pillars--and work out a plan for “The Future We Want.”However, the focus of the conversation has shifted heavily to centre around the notion of a “Green Economy.” But what exactly does that mean? Well, it depends who you ask... The UNEP, in the 2011 paper “Towards a Green Economy,” says “Practically speaking, a green economy is one whose growth in income and employment is driven by public and private investments that reduce carbon emissions and pollution, enhance energy and resource efficiency, and prevent the loss of biodiversity and ecosystem services.” In short, the Green Economy is billed as one that improves human wellbeing by means of economic growth, while at the same time protecting nature. But not everybody sees it as such...

La via campesina “[...] another phase of what we identify as ‘green structural adjustment programs’ which seek to align and re-order the national markets and regulations to submit to the fast incoming ‘green capitalism.’”

Status quo in disguise? Many civil society organizations, especially in the global south, have spoken out against the Green Economy idea. Here are some of the reasons.

Developing countries cannot compete with developed north in subsidising research and development of ‘green’ industry. Developed world agro subsidies are not covered by WTO restrictions, so they maintain monopolies

Resource scarcity is caused by the large demand for resources. Mostly that demand is not for satisfying basic human needs. but for supporting over-consuming, excessive lifestyles, mostly in the developed world.

Cupula dos povos “[...] opens new territories to the economy that exploits people and environment, increasing the myth that unlimited economic growth is possible.”

“an increasing trend of relying on ‘markets’ whereby companies and countries can pollute beyond their assigned limit by buying pollution or emission certificates from other companies or countries.”

Reducing human-nature interaction to a mercantilist relationship is not only alienating but also denies the intrinsic value of nature regardless of its utility.

Trans National Institute “[...] new tool for global powers to appear to incorporate criticisms of the destructive model of civilisation on the understanding that the assumptions and underlying logics of this model must remain unquestioned?” “[...] effort to demonstrate that [we can resolve planetary crises] without altering existing power structures, nor the relations of domination and exploitation. [...] it is argued that the same market mechanisms and scientific and technological patterns [...] of sustained growth, can save life.” “... opportunistic manipulation of the ecological and social crises. Rather than addressing the real structural causes of inequality and injustices, capital is using “green” language to launch a new round of expansion. Corporations and the financial sector need governments to institutionalise new rules [...] to guarantee them against risks and to create the institutional framework for the financialisation of nature. Many governments are willing partners [...]

BASIS FOR A JUST ECONOMY While fleshing out the details of what a good green economy should be is far beyond the scope of this piece, we believe there should be some principles built in. Below is a word-cloud with some of these principles, many of which have been elaborated on elsewhere. Fundamentally, we question the notion that the only way for human to interact with and protect nature is by subsuming it into a market economy. Rio is not the beginning or the end of the tug-o-war over the Green Economy idea, but it is an important battle. When entering the discussion, we ask you to consider the following: â&#x20AC;&#x153;What is the future you really want? What is the future you need? And what will it take to get it?

rights to nat ur e

Another world is possible... 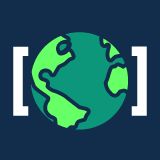 What is the Green Economy?

The idea of 'Green Economy' has been pushed to the fore of sustainable development discussions. But what does that mean and why has there be...

What is the Green Economy?

The idea of 'Green Economy' has been pushed to the fore of sustainable development discussions. But what does that mean and why has there be...