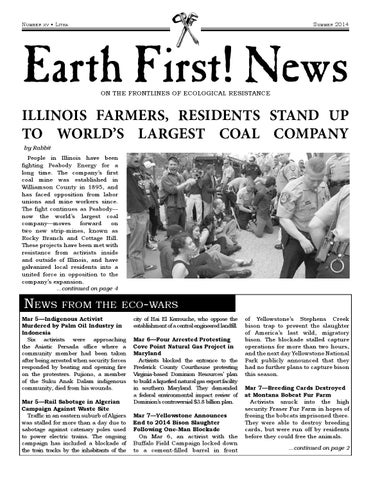 Earth First! News ON THE FRONTLINES OF ECOLOGICAL RESISTANCE

ILLINOIS FARMERS, RESIDENTS STAND UP TO WORLD’S LARGEST COAL COMPANY by Rabbit People in Illinois have been fighting Peabody Energy for a long time. The company’s first coal mine was established in Williamson County in 1895, and has faced opposition from labor unions and mine workers since. The fight continues as Peabody— now the world’s largest coal company—moves forward on two new strip-mines, known as Rocky Branch and Cottage Hill. These projects have been met with resistance from activists inside and outside of Illinois, and have galvanized local residents into a united force in opposition to the company’s expansion. ...continued on page 4

Mar 5—Indigenous Activist Murdered by Palm Oil Industry in Indonesia Six activists were approaching the Asiatic Persada office where a community member had been taken after being arrested when security forces responded by beating and opening fire on the protesters. Pujiono, a member of the Suku Anak Dalam indigenous community, died from his wounds. Mar 5—Rail Sabotage in Algerian Campaign Against Waste Site Traffic in an eastern suburb of Algiers was stalled for more than a day due to sabotage against catenary poles used to power electric trains. The ongoing campaign has included a blockade of the train tracks by the inhabitants of the

of Yellowstone’s Stephens Creek bison trap to prevent the slaughter of America’s last wild, migratory bison. The blockade stalled capture operations for more than two hours, and the next day Yellowstone National Park publicly announced that they had no further plans to capture bison this season. Mar 7—Breeding Cards Destroyed at Montana Bobcat Fur Farm Activists snuck into the high security Fraser Fur Farm in hopes of freeing the bobcats imprisoned there. They were able to destroy breeding cards, but were run off by residents before they could free the animals. ...continued on page 2