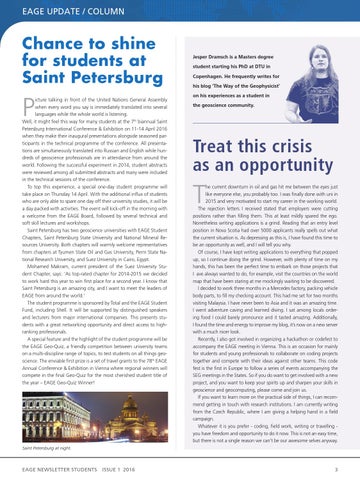 Chance to shine for students at Saint Petersburg

icture talking in front of the United Nations General Assembly when every word you say is immediately translated into several languages while the whole world is listening. Well, it might feel this way for many students at the 7th biannual Saint Petersburg International Conference & Exhibition on 11-14 April 2016 when they make their inaugural presentations alongside seasoned participants in the technical programme of the conference. All presentations are simultaneously translated into Russian and English while hundreds of geoscience professionals are in attendance from around the world. Following the successful experiment in 2014, student abstracts were reviewed among all submitted abstracts and many were included in the technical sessions of the conference. To top this experience, a special one-day student programme will take place on Thursday 14 April. With the additional influx of students who are only able to spare one day off their university studies, it will be a day packed with activities. The event will kick-off in the morning with a welcome from the EAGE Board, followed by several technical and soft skill lectures and workshops. Saint Petersburg has two geoscience universities with EAGE Student Chapters, Saint Petersburg State University and National Mineral Resources University. Both chapters will warmly welcome representatives from chapters at Tyumen State Oil and Gas University, Perm State National Research University, and Suez University in Cairo, Egypt. Mohamed Makram, current president of the Suez University Student Chapter, says: ‘As top-rated chapter for 2014-2015 we decided to work hard this year to win first place for a second year. I know that Saint Petersburg is an amazing city, and I want to meet the leaders of EAGE from around the world.’ The student programme is sponsored by Total and the EAGE Student Fund, including Shell. It will be supported by distinguished speakers and lecturers from major international companies. This presents students with a great networking opportunity and direct access to highranking professionals. A special feature and the highlight of the student programme will be the EAGE Geo-Quiz, a friendly competition between university teams on a multi-discipline range of topics, to test students on all things geoscience. The enviable first prize is a set of travel grants to the 78th EAGE Annual Conference & Exhibition in Vienna where regional winners will compete in the final Geo-Quiz for the most cherished student title of the year – EAGE Geo-Quiz Winner!

Jesper Dramsch is a Masters degree student starting his PhD at DTU in Copenhagen. He frequently writes for his blog ‘The Way of the Geophysicist’ on his experiences as a student in the geoscience community.

Treat this crisis as an opportunity

he current downturn in oil and gas hit me between the eyes just like everyone else, you probably too. I was finally done with uni in 2015 and very motivated to start my career in the working world. The rejection letters I received stated that employers were cutting positions rather than filling them. This at least mildly spared the ego. Nonetheless writing applications is a grind. Reading that an entry level position in Nova Scotia had over 5000 applicants really spells out what the current situation is. As depressing as this is, I have found this time to be an opportunity as well, and I will tell you why. Of course, I have kept writing applications to everything that popped up, so I continue doing the grind. However, with plenty of time on my hands, this has been the perfect time to embark on those projects that I ave always wanted to do, for example, visit the countries on the world map that have been staring at me mockingly waiting to be discovered. I decided to work three months in a Mercedes factory, packing vehicle body parts, to fill my checking account. This had me set for two months visiting Malaysia. I have never been to Asia and it was an amazing time. I went adventure caving and learned diving. I sat among locals ordering food I could barely pronounce and it tasted amazing. Additionally, I found the time and energy to improve my blog, it’s now on a new server with a much nicer look. Recently, I also got involved in organizing a hackathon or codefest to accompany the EAGE meeting in Vienna. This is an occasion for mainly for students and young professionals to collaborate on coding projects together and compete with their ideas against other teams. This code fest is the first in Europe to follow a series of events accompanying the SEG meetings in the States. So if you do want to get involved with a new project, and you want to keep your spirits up and sharpen your skills in geoscience and geocomputing, please come and join us. If you want to learn more on the practical side of things, I can recommend getting in touch with research institutions. I am currently writing from the Czech Republic, where I am giving a helping hand in a field campaign. Whatever it is you prefer - coding, field work, writing or travelling you have freedom and opportunity to do it now. This is not an easy time, but there is not a single reason we can’t be our awesome selves anyway. 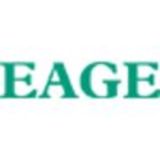 The EAGE Newsletter Students focuses on EAGE activities, industry news and other issues of interest to students of the geosciences.

The EAGE Newsletter Students focuses on EAGE activities, industry news and other issues of interest to students of the geosciences.