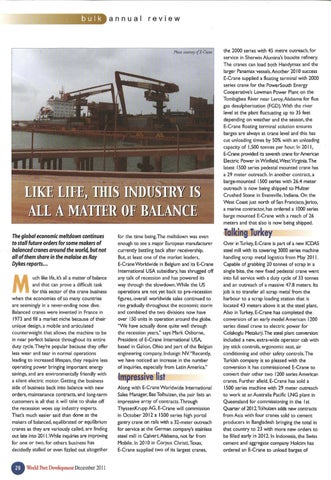 The global economic meltdown continues to stall future orders for some makers of balanced cranes around the world, but not all of them share in the malaise as Ray Dykes reports ... uch like life, it's all a matter of balance and that can prove a difficult task for this sector of the crane business when the economies of so many countries are seemingly in a never-ending nose dive. Balanced cranes were invented in France in 1973 and fill a market niche because of their unique design, a mobile and articulated counterweight that allows the machine to be in near perfect balance throughout its entire duty cycle. They're popular because they offer less wear and tear in normal operations leading to increased lifespan, they require less operating power bringing important energy savings, and are environmentally friendly with a silent electric motor. Getting the business side of business back into balance with new orders, maintenance contracts, and long-term customers is all that it will take to shake off the recession woes say industry experts. That's much easier said than done as the makers of balanced, equilibrated or equilibrium cranes as they are variously called, are finding out late into 20 I I. While inquiries are improving for one or two, for others business has decidedly stalled or even fizzled out altogether

for the time being. The meltdown was even enough to see a major European manufacturer currently battling back after receivership. But, at least one of the market leaders, E-Crane Worldwide in Belgium and its E-Crane International USA subsidiary, has shrugged off any talk of recession and has powered its way through the slowdown. While the US operations are not yet back to pre-recession figures, overall worldwide sales continued to rise gradually throughout the economic storm and combined the two divisions now have over ISO units in operation around the globe. "We have actually done quite well through the recession years," says Mark Osborne, President of E-Crane International USA, based in Galion, Ohio and part of the Belgian engineering company, lndusign NV. "Recently, we have noticed an increase in the number of inquiries, especially from Latin America."

j""'PAÂŤsive list Along with E-Crane Worldwide International Sales Manager, Bas Tolhuizen, the pair l ~sts an impressive array of contracts. Through ThyssenKrupp AG, E-Crane will commission in October 20 12 a 1500 series high portal gantry crane on rails with a 32-meter outreach for service at the German company's stainless steel mill in Calvert, Alabama, not far from Mobile. In 20 I0 in Corpus Christi, Texas; E-Crane supplied two of its largest cranes,

the 2000 series with 45 metre outreach, for service in Sherwin Alumina's bauxite refinery. The cranes can load both Handymax and the larger Panamax vessels.Another 20 I0 success E-Crane supplied a floating terminal with 2000 series crane for the PowerSouth Energy Cooperative's Lowman Power Plant on the Tombigbee River near Leroy, Alabama for flue gas desulpherisation (FGD). With the river level at the plant fluctuating up to 35 feet depending on weather and the season, the E-Crane floating terminal solution ensures barges are always at crane level and this has cut unloading times by 50% with an unloading capacity of I,500 tonnes per hour. In 20 I I, E-Crane provided its seventh crane for American Electric Power in Winfield, West Virginia. The latest 1500 series pedestal mounted crane has a 29 meter outreach. In another contract, a barge-mounted 1500 series with 26.4 meter outreach is now being shipped to Mulzer Crushed Stone in Evansville, Indiana. On the West Coast just north of San Francisco, Jerico, a marine contractor, has ordered a I000 series barge mounted E-Crane with a reach of 26 meters and that also is now being shipped.

Over in Turkey, E-Crane is part of a new ICDAS steel mill with its towering 3000 series machine handling scrap metal logistics from May 20 I I. Capable of grabbing 20 tonnes of scrap in a single bite, the new fixed pedestal crane went into full service with a duty cycle of 33 tonnes and an outreach of a massive 47.8 meters. Its job is to transfer all scrap metal from the harbour to a scrap loading station that is located 43 meters above it at the steel plant. Also in Turkey, E-Crane has completed the conversion of an early model American 1200 series diesel crane to electric power for Colakoglu Metalurji. The steel plant conversion included a new, extra-wide operator cab with joy stick controls, ergonomic seat, air conditioning and other safety controls. The Turkish company is so pleased with the conversion it has commissioned E-Crane to convert their other two 1200 series American cranes. Further afield, E-Crane has sold a 1500 series machine with 29 meter outreach to work at an Australia Pacific LNG plant in Queensland for commissioning in the Ist Quarter of 20 12. Tolhuizen adds new contracts from Asia with four cranes sold to cement producers in Bangladesh bringing the total in that country to 23 with more new orders to be filled early in 20 12. In Indonesia, the Swiss cement and aggregate company Holcim has ordered an E-Crane to unload barges of

gypsum and coal in a greenfield project. And in Germany,ArcelorMittal recently ordered two E-Cranes for a steel plant.

~...........~_..."'""'ck Not so lucky during the prolonged economic downturn has been the Seram Group of Perpignan, France, the original inventor of the equilibrium crane concept, which is long since out of patent protection and has been copied and adapted by several companies. Much has happened to Seram since its economic troubles at the height of the global recession. "Even though we went into receivership until late in September 20 I0, the business kept on;' says Seram Group Project Engineer Pauline Julia. As the world leader, at least by volume with over 650 units in place, the company continued to manufacture cranes (especially for the scrap metal market) right through the worst days of its history. "We experienced cancellation of orders and a complete stop of activity in 2008-2009, but most of our customers kept on working, quite differently sometimes, and they still needed cranes to handle materials, and load or unload ships," says Julia. Survival became imperative for Seram and its team. "Despite the economic recession and the consequences it had on our factory organisation, we made no concession on the quality of our products, or the reliability of our company. "If you keep on manufacturing a good product and properly service your customers, you pass through," adds Julia. And that's what the Seram Group has achieved, coupled with factory consolidation and a modified organisation chart to make it more efficient.

ood news There is some good news, however, and Seram lists among its 20 I0-20 II equilibrium crane a contract success with Derichebourg Environment, a major player working for companies and local authorities around the world and specialising in the recycling of end-of-life consumer goods, re-used materials and industrial waste. And there were contracts with Stena Jern & Metal in Denmark working again in recycled metals and several similar contracts with Spanish recycling companies, plus numerous offshore maintenance contracts. There is more optimistic news for 20 12, according to Julia, who says Seram is in a good position in seve'ral tenders for cranes in scrap recycling, for port cranes, and also offshore cranes. Meanwhile, Seram has created an offshore department dedicated to crane design and to deal with the maintenance of

crane parks around the world.And the company has also beefed up its after sales service department and is offering full service contracts, maintenance contracts and virtually anything customers might need.

Lippencott says Metso knows what its cranes can do, particularly in handling scrap metal, as there are over I00 of the company machines working throughout Europe, largely in the recycling business.

For Metso Minerals, another of the major makers of what it calls equilibrated cranes under license to Sobemai of Belgium, the market has dried up since 2009 with no sales through 20 I0-20 I I. Metso, with so many other irons in the bulk materials handling fire, such as rail car dumpers and positioners, grinding mills, stacker-reclaimers, crushers, and continuous barge unloaders, has simply done other things. So well in fact that 20 II has been the best year overall for Metso Minerals in II years, says Tom Lippencott, Vice President of Mining Capital Sales for USA-Canada. But, with no sales of equilibrated cranes for a couple of years, Metso is not pursuing the balanced crane market aggressively for now as it is currently its least productive product line. The company had been making inroads into the limestone business on US inland waterways, but Lippencott says even that market segment has slowed down of late. He expects some signs of recovery in the limestone business in 20 12. There's also interest in the recycling scrap metal market for equilibrated cran~s and Metso is doing market surveys now to determine how it will make its approach to this new business niche. The company sees market openings for its I00-foot reach cranes with large firms handling scrap and has a smaller version with up to a 75-foot reach for the myriad of "Mom and Pop" yards currently running half a dozen different crane types.

With slow and steady growth every year, even through the recession, E-Crane International USA is gearing up for a big push into the steel recycling business, says Mark Osborne, its President. The US subsidiary has built a demonstration model 700 series crane at its Galion, Ohio site, the largest on-site show model it has ever had. "We feel it will be ideal for a larger recycling yard coupled with a shredder;' says Osborne. E-Crane believes it has a bright future and in the US has doubled its service staff in the past year to cover all of North and South America. "I am proud of the way we become partners with our clients to provide them more than just a piece of equipment," says Osborne. "We are a team with them to ensure the equipment is mounted well for a trouble-free service life." As product development continues, E-Crane has a new application out on the market, a barge-mounted crane which has already sold two machines to Europe and another to the US West Coast. "There's a push to become as well known in the recycling business as we are in the bulk material unloading business;Âˇ says Osborne. He predicts that in 20 12, E-Crane will generate "substantial" business in South America and lists Brazil, Argentina and Paraguay as the "hottest areas." And, his counterpart Tolhuizen is looking for lively sales in the Asian market as surprising optimism abounds in the company ranks. rlf 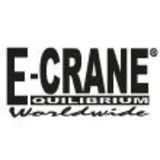 Like Life, This Industry Is All a Matter of Balance

The global economic meltdown continues to stall future orders for some makers of balanced cranes around the world, but not all of them share...

Like Life, This Industry Is All a Matter of Balance

The global economic meltdown continues to stall future orders for some makers of balanced cranes around the world, but not all of them share...