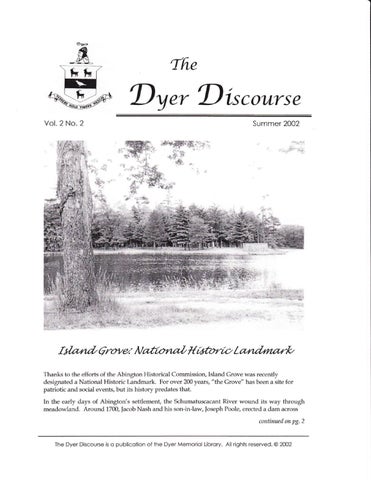 Hand, 6rova' ilaftona,L t &tot tp L andrnat k, Thanks to the efforts of the Abington Historical Commission, Island Grove was recently designated a National Historic Landmark. For over 200 years, "the Grove" has been a site for patriotic and social events, but its history predates that.

In the early days of Abington s settlement, the Schumatuscacant River wound its way through meadowland. Around 1700,Jacob Nash and his son-in-law, |oseph Poole, erected a dam across continued on pg.2

The Dyer Discourse is

Fromttl,wDLrertor Sp.i.g cleaning kept us busy for the past few months as we prepare to repair the water damage onthe second floor caused by last summer's roof leak. Librarian Pam Whiting, with help from Trustee Clare

Sullivan, has done a remarkable job of packing and storing everything. I'm pleased to announce thatJack Buckley has joined the Dyer's Board of Trustees. I'm looking forward to working withJack in his new roleHave a good and sa{e summer, everyone!

the river near what is now Centre Avenue to provide power for a sawrnill. The dam created a tear-drop shaped pond known as Nash's Mill Pond. The height of the dam was increased in 1836, and the pond took on a new shape. An arm of water appeared to the east separated from the main body of the pond by the pine-covered grove. When viewed from the milldam (now Centre Avenue), the point of the pine grove appeared to be an island, hence the name "Island Grove Park" - although in realrty it is a peniruula and not an island. The pine grove itself was originally owned by Stephen French, who sold it to Luke Nash 1r'1797. In 1803, Jacob Reed bought the pine grove land. During the stewardship of the Reed family, Island Grove Park saw development not only as a patriotic meeting place, but also a social meeting place. By the early 1900s, it was recognized as a leading recreation area of its

at Island Grove included swimmin& boating, fishing, and lawn bowlinginthe surruner, as well as ice skating and ice boating in the winter.

By the mid-1800s,Island Grove had become a leading site for anti-slavery rallies. Events held there were regularly written up in the Liberator, the abolitionist newspaper. Many rally participants traveled to Island Grove

About 1200 Abingtonians fought in the Civil War; in a town with a population of 8500 in 1860, this accounted for maybe half of all the able-bodied men. These anti-slavery activities undoubtedly contributed to the sense of righteousness that led to the high enlistment rate by Abington men. A monument erected in 1909 by Capt. Moses N. Arnold conunemorates the

abolitionist effort. It marks the spot where the speakers' pla$orm stood under the pine trees for the abolition meetings in Island Grove Park. Capt. Arnold, a local shoe manufacturer, had fought with the 12th Massachusetts Volunteers, in Company G.

In7972, for its the 200th amiversary, the town dedicated the Memorial Bridge and Arch to commemorate Abington's Civil War soldiers and sailors. The stone archway is topped by abtonze eagle and flanked by bas-reliefs of a soldier and a sailor by Boston sculptor Bela L. Pratt. Architect f. Williams Beal, who also designed the Dyer building, designed the bridge and archway. The memorial speaks volumes for the way this community felt about those who left home to fight for the Union. Island Grove's new National Historic Landmark status is well deserved for not only is the Grove rich in history, but it continues to play a central role in the community. More informatian on Islond Grove canbe found

in the Dyer's colbctions. And don't rniss the exhibition currently on displny in the Sam Dyer Room!

to our 2001 benefactors, without whom we cannot

continue to provide the level of service to our community that we do: |ames & Barbara Aikenst

for his gift of Col. Charles L. Rice's GailWar saddle

D y e,r - Exhibition on the Deborah Sampson Chapter of the DAR