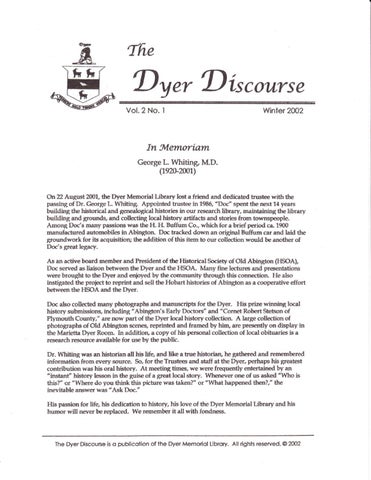 Dvey Discourse Vol.2 No. I

An22August200l the Dyer Memorial Library lmta friend and dedicabd trusteewith the passing of Dr. George L. Whiting. Appointed trus@ in 1J86, "Doc" spatt tfte nort 14 years buildingthe hisborical and gerrealogicalhistoties in our research library, maintainingthe fibrary building and gounds, and collecting local hismry artifacts and stories from townspeople" Among Doc's many passions was the H. H. Butrum Co,, which for a brief period ca, 1900 manufactured automobiles in Abington. Doc backed down an original Buffum car and laid the groundwork for ib acquisition; the addition of this item to our collection would be another of DoCs geat legacy. As an active board mernber and Presiderttof ttw FlistoricalSociety of Old Abington (I{SOA), Doc served asr liaissn between the Dyer and the HSOA. Many fine lectures and presentations

ttreMariettaDyerRoonu Inadditioruacopyofhlspersonalcollectionoflocalobituariesisa research resource available for use by ttre public. Dr. Whiting was an historian all his life, and like

informationfromeverysource. So,fortheTrugteesandstaffattheDyer,perhapshisgreatest contribution was his oral history. At meting times, we were frequortly entertained by an "instanf history leson in the guise of a ggeat local story. Whenever one of us asked 'Who is this?' or "Where do you think this picfure was taken?" or "What happened thenl' the inevitable iurswer was "Ask Dx..' His passion for life, his dedicationto history his love of the Dyer Memorial Library and his humor will never be replaced. We remember it all wilh fondness.

Beginning each issue with a memoriam was not what I had in mind when I started this newsletter. But, alas, we lost another principal member of our institution. Longtime trustee Dr. George ("Doc") Whitins suffered a fatal stroke at the end of August. His absence is deeply felt by all of us here atthe Dyer.

Imagine coming to work on a Monday morning to be greeted by a waterfall througJr a ligftt fixture in the front lobby. That is precisely what happened to Barbara Aiken when she came to wotk on August 13th. But thanks to her quick thinking, our disaster response team of staff, trustees, and volunteers was immediately mobilized.

]ust prior to Doc's passing a clogged roof drain led to a major leak that caused a great deal of damage to the building. We are fortunate that nothing was lost from the collections - thanks to the quick thinking and actions of our trustees, staff, and friends.

Due to a clogqed drainpipe, the weekend rainstorm had turned the Dyer roof into a swimming pool. As water rose above the edge of the rubber membrang it seeped into the building and worked its way down. Along the way, it did damage to our plaster walls and ceilings, as well as soaked the attic insulation. This was actually a blessing in disgnise. Because a lot of the water was absorbed by the plaster and insulatioru not much got to the collections.

The last few months have notben kind to the Dyer. But in a crisis, one discovers who onds friends are. And I am happy to say that the Dyer has many, many good friends. Thankyou to each and every one ofyou for helping us througlr this rough spot.

Tuesda1 September 11,2W1^. Events of that day has affected everyone tc varying degrees. As we all try to come to grips with the changes in our world, it is important that our community's (this means you!) reactions to the evenb are documented not only by the media, but also your first hand experiences and thoughe. fust like the private diaries and letters of long ago are rich resources to present day scholar+ your personal account of how September 11th has affected your life willbecome important research material for future historians. 5o" please send us letters or email with your recollections and reflections. Your words will be archived so later generations will know what you were doing that day, what your opinions of the events are at that time and now, and how tlis has affected you and the community you live in. We look forward to hearing from you!

To be sure we had nnany books and paper items that were damp and some that were very wet. But werythingwas recoverable. The damp items were laid out to air dry inhouse, and the wet items were sent outfor

vacuum fuerlze drying. The library was closed to the public for three weeks while recovery efforb were under way, reflrming operations after Labor Day weekmd. The upstairs rooms,

however, will remainclosed until repair work to the walls and ceilings have been completed. We are also planning to take this opportunity to createnew exhibits for these rooms that will focus on the history of the area and the Dyer family. Many tlnnks to the Abington Fire Department for sending over a crew to help free up the drain; Arthur Sullivan, Abington Assistant Superintmdent of Schools, who sent out two eleckiciaru as soon.rs we called for assistance and who also provided all the stock necessary to run temporary wiring fot the drying equipment at no cost to us; electricians |ason Linn and Charles Palmeri who cante and did the work faster

than a speedingbulle! volunteers Mike Murphy, David Hills, and |imAikenrs who came to help out as soon as they heard; staff

memhrs Barbara Aikens, Pam Whiting, and MalcolmWhiting and trustees Jim Hoban, Mary Rourke, Clare Sullivan, and the late Doc Whiting - who did whatever needed to be done.

aaa Coyvternafucal/Iw?rogrc* The photographic portrait of jesse H. |ones has found a benefactor for ib preservation in the person of John M. Kelly of Norwood, who has stepped forward with a generous

conkibution towards conservation work of this important piece. ]ack Kelly grew up in Abington; he is an authority on |esse ]ones and a Civil War historian specializing in the Battle of Gettysburg. Thank you, |ack! Henry Jones was born in Believilla Upper Canada, on March 29,1896, to the Rev. Charles and Alsira Holmes Jones. He studied at Hamilton Collegq Williams

Collegg and Harvard College - fromwhere he graduated in 1856, tenth in his class. The Civil War broke out dwing ]ones' last

year at Andover Theological Seminary. He felt compelled to ioin the service, and with help from an influential friend, he organized Company I of the 60th New York Infantry, where he served as Captain. During the course of the war, jones saw action in the battles of Chancellorville, Gettysburg, Lookout Mountain, Ringgold, and Chattanooga.

corrmand from a furlough. Amonghis companions on the iourney was a sergeant in an Ohio regiment. They stopped to rest along the road, and the sergeant went exploring - returning with a pair of steel breastplates he had found. When |ones mentioned that he wished he was the one that had found them, the sergeant gave the breastplates to |ones, sayingthathe did not want to carry them. Two months later, inIuly 1863, Jones and his regimmtwere engaged in the Battle of Culp's Hill at Gettysburg. Jones wrote an account of how the breastplates saved his

assumed pastoral duties in Natick, Mass. Two years later, he accepted a position at the Congregational Church in Rockland. Thus beganhis association with this area. In 1873, he began work in North Abington, which continued until he moved to F{alifax in 1897. During his Abington pastorate, ]ones was active in assorted reform work, such as women's suffrage, temperance, and labor. He was critical in establishing the Knights of Labor in North Abington. He was also editor (1882-1896) of the "Noth Abington Public," which appeared on the last page of the Rockland Standnrd.

Rw. |ones'breastplabs and some of his papers are in the Dyer collection, as well as mole complete and detailed biographic information.

Thursday, 23May N2, 1;{10-5:(Dpm * No. 3 of 3 in the 2nd Annuat Genealogy Open House series with Diane Bryant and Rodneysmith of south shoreGenealogical socilty.