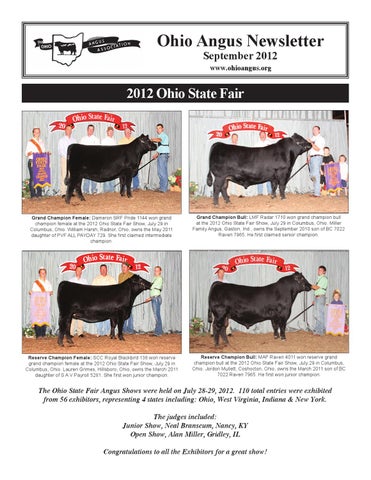 Ohio Angus Breeders, The fall sale season is just about upon us! And there is a full slate of sales planned in and around Ohio. Starting off on September 22nd will be the Maplecrest Farms Production Sale, John & Joanie always offer an elite set of females and this year won’t be any different. I plan to go through their sale offering before the sale, so if anyone is unable to attend and needing assistance making purchases, let me know. The Eastern Ohio Angus and Buckeye Best of Both Worlds Sales are still accepting consignments. If you have cattle to sell and haven’t submitted your information, please do so quickly. Consignment forms for both are available at www.ohioangus.org. The Eastern Ohio Angus Sale is scheduled for October 27th at Muskingum Livestock in Zanesville and the Buckeye Best of Both Worlds Sale will be on November 17th at Claylick Run Angus in Newark. The Ohio Angus Field Day was held on August 26th and was a huge success. We had 83 attendees that enjoyed a great program, meal & dessert! Thank You to everyone that attended and helped make the Field Day possible. If you are interested in hosting a future Ohio Angus Field Day please contact myself or Chairman, Joe Sanders. More highlights and pictures from the day are on page 14 of this issue. The Ohio Farm Science Review will be held on September 18-20 at the Molly Caren Ag Center in London, OH. The Ohio Angus Association will be represented at our building at 647 Swine Ave. This is a great opportunity to view display cattle, visit with other Angus breeders and catch up on the latest news & Info from the Ohio and American Angus Associations.

Monthly Ads now appear on the web!!! Deadline is the 20th of the preceding month in which you wish to advertise, or contact Dan ahead of time for assistance and pricing to create an ad - design and ad retrieval fees from other publications will apply. Call or email today for details to meet your advertising needs!

Advertise Your Farm Here! Purchase a Newsletter Business Card ad today! And get year round advertising for only $200! That works out to only $17/per month to ensure your Farm & Contact Info is in front of your potential cliente at all time! Call Dan today at 740-505-3843 for more info! -2-

From these leading Michigan Angus herds

A daughter of Mytty In Focus bred to a son of TC Freedom 104.

Daughter of Traveler 004 bred to MSU Nothing But Net 010.

A daughter of BC Lookout.

A pregnancy from Champion Hill Georgina 6240.

Sired by Traveler 004, she sells with an August heifer calf at side by Creek Side Spencer 047.

A daughter of Creek Side Reporter due to Nitro 04.

OCA Young Cattlemen’s Conference a Learning Experience MARYSVILLE, Ohio – The 2012 Ohio Cattlemen’s Foundation Young Cattlemen’s Conference (YCC) was held August 9-11. This year’s three-day leadership development program, made possible by Pioneer, the Ohio Soybean Council and Farm Credit Mid-America, brought together 10 young cattlemen and women from across the state to develop future spokespeople for the beef industry. The conference kicked off Thursday evening at the Crowne Plaza North in Columbus. The dinner was made possible by event sponsors and the Ohio Cattlemen’s Association. Participants were witness to the 2012 Ohio State Fair Commercial Cattle Show carcass awards presentation. Guest speaker Daren Williams, Executive Director of Communications of the National Cattlemen’s Beef Association (NCBA), followed the awards presentation, challenging young producers to get involved in the opportunities of today’s beef industry. Friday morning, delegates participated in a spokesperson training program led by Williams. Williams led participants through mock media interviews and provided them with the tools

necessary to effectively share their story with any consumer audience. Following lunch, participants traveled to the Ohio State House where they met with Senator Bob Peterson, 17th District. Senator Peterson spoke about current Ohio legislation affecting the beef cattle industry and the future of agriculture in Ohio. Friday evening, YCC members attended Beef Night at the Ballpark at Huntington Park. They promoted beef to consumers and cheered the Columbus Clippers to victory. On Saturday morning, delegates arrived at The Ohio State University where they were led through a mini Beef 509 course taught by Caitlin Bushman, Ohio State University Meat Science instructor. The group learned about the leading factors affecting meat quality, grading, price, flavor and tenderness. They also had the unique opportunity to view the grand and reserve champion beef carcasses from the 2012 Ohio State Fair. John Grimes, Ohio Beef Extension Educator, discussed with participants the current issues in Ohio’s beef industry. Delegates then took a tour of the Woody Hayes Athletic Facility, learning more about the history of Ohio State Football. Ohio Beef Council staff led attendees through Continued on next page...

a discussion regarding OBC’s role in checkoff collection and current beef promotional efforts in Ohio. The conference concluded with a discussion led by OCA staff highlighting the value of membership. The Ohio Cattlemen’s Association is an affiliate of the NCBA and is the state’s spokesperson and issues manager for all segments of the beef cattle industry including cattle breeders, producers and feeders. Through OCA, cattle producers work to create a positive business environment, while providing consumers with a safe and wholesome product. Young cattle farmers interested in attending the 2013 YCC should contact Brian Detty at (614) 873-6736 for details.

William Harsh, Radnor, left, and Lindsey Grimes, Hillsboro, right, represented Ohio at the 2012 LEAD (Leaders Engaged in Angus Development) Conference, Aug. 2-5 in Fort Collins, Colo. A total of 185 youth and advisors from 33 states and Canada attended the conference, “Peak Performance,” where they enhance leadership and interpersonal skills while learning more about the beef industry.

Delivered to your farm with no extra shipping

Thank you so muc h for the beautifu C .J . Brown prin l t that was presen ted to us at the Ohio State Fair. You r thoughtfulness w as very touching and we are so very proud to say that we ar e part of the Ohio Jr. A ngus family. W e truly enjoyed serving as co-chairs of the 2012 National Jr. Ang us Show and wil l always support our yout h and their endeav ors. This print will al ways hold a very special place in out hear ts. Thanks Again, John & Joanie G rimes

Our expectations for excellence from MCF females far exceed their accomplishments in the show ring. MCF females are pretty on the outside and powerful on the inside. That’s our business!

One of the first Confidence daughters to sell, 2026 is exactly the type of female we always hoped to produce. Flawless phenotype and the genetics to back it up, she ranks in the top 2% for Milk, top 10% for RE and $B. Her +.8 BW EPD adds value to her in any environment.

It’s always comforting to find a tremendous female in a sale AND see several of her daughters also selling. 7088 achieved much success in the showring. Today, she’s achieving even more as a donor. She sells safe in calf to GAR Game On.

Watch the sale and bid live online. Buyers must create an account and request a buyer number. Register to bid @ www.liveauctions.tv.

At the Farm • Hammondsville, OH

“Where the Beef Value is”

2012 Angus Field Day The Ohio Angus Field Day was held on Sunday, August 26th in Wayne Co. 83 attendees were treated to a morning program including a tour of the new Certified Angus Beef Education & Culinary Center, updates on C.A.B. and the GeneMax genetic test, as well as delicious C.A.B. Lunch. After lunch, everyone headed out to Meadow Lane Angus where Mark McCully and Henry Bergfeld led the group in selection competitions applying GeneMax test results and E.P.D’s into the selection process. To wrap up the day, we were treated to homemade ice cream and fresh cobbler!

Best of Both Worlds

• Featuring the “Best” Angus, Simmental and Sim-Angus genetics from Ohio and surrounding states! • Co-Sponsored by the Ohio Angus and Ohio Simmental Associations.

Call Today for a Sale Catalog 740-505-3843 Sale Catalog online at www.ohioangus.org and www.ohiosimmental.com

DATED MATERIAL DO NOT DELAY