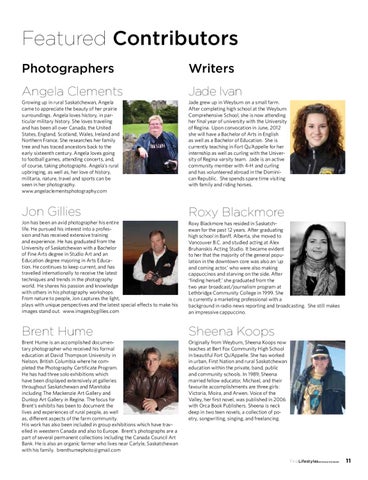 Growing up in rural Saskatchewan, Angela came to appreciate the beauty of her prairie surroundings. Angela loves history, in particular military history. She loves traveling and has been all over Canada, the United States, England, Scotland, Wales, Ireland and Northern France. She researches her family tree and has traced ancestors back to the early sixteenth century. Angela loves going to football games, attending concerts, and, of course, taking photographs. Angela’s rural upbringing, as well as, her love of history, militaria, nature, travel and sports can be seen in her photography. www.angelaclementsphotography.com

Jade grew up in Weyburn on a small farm. After completing high school at the Weyburn Comprehensive School, she is now attending her final year of university with the University of Regina. Upon convocation in June, 2012 she will have a Bachelor of Arts in English as well as a Bachelor of Education. She is currently teaching in Fort Qu’Appelle for her internship as well as curling with the University of Regina varsity team. Jade is an active community member with 4-H and curling and has volunteered abroad in the Dominican Republic. She spends spare time visiting with family and riding horses.

Jon has been an avid photographer his entire life. He pursued his interest into a profession and has received extensive training and experience. He has graduated from the University of Saskatchewan with a Bachelor of Fine Arts degree in Studio Art and an Education degree majoring in Arts Education. He continues to keep current, and has travelled internationally to receive the latest techniques and trends in the photography world. He shares his passion and knowledge with others in his photography workshops. From nature to people, Jon captures the light, plays with unique perspectives and the latest special effects to make his images stand out. www.imagesbygillies.com

Roxy Blackmore has resided in Saskatchewan for the past 12 years. After graduating high school in Banff, Alberta, she moved to Vancouver B.C. and studied acting at Alex Bruhanskis Acting Studio. It became evident to her that the majority of the general population in the downtown core was also an ‘up and coming actor,’ who were also making cappuccinos and starving on the side. After ‘finding herself,’ she graduated from the two year broadcast/journalism program at Lethbridge Community College in 1999. She is currently a marketing professional with a background in radio news reporting and broadcasting. She still makes an impressive cappuccino.

Brent Hume is an accomplished documentary photographer who received his formal education at David Thompson University in Nelson, British Columbia where he completed the Photography Certificate Program. He has had three solo exhibitions which have been displayed extensively at galleries throughout Saskatchewan and Manitoba including The Mackenzie Art Gallery and Dunlop Art Gallery in Regina. The focus for Brent’s exhibits has been to document the lives and experiences of rural people, as well as, different aspects of the farm community. His work has also been included in group exhibitions which have travelled in weestern Canada and also to Europe. Brent’s photographs are a part of several permanent collections including the Canada Council Art Bank. He is also an organic farmer who lives near Carlyle, Saskatchewan with his family. brenthumephoto@gmail.com

Originally from Weyburn, Sheena Koops now teaches at Bert Fox Community High School in beautiful Fort Qu’Appelle. She has worked in urban, First Nation and rural Saskatchewan education within the private, band, public and community schools. In 1989, Sheena married fellow educator, Michael, and their favourite accomplishments are three girls: Victoria, Moira, and Arwen. Voice of the Valley, her first novel, was published in 2006 with Orca Book Publishers. Sheena is neck deep in two teen novels, a collection of poetry, songwriting, singing, and freelancing. 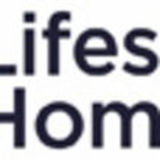