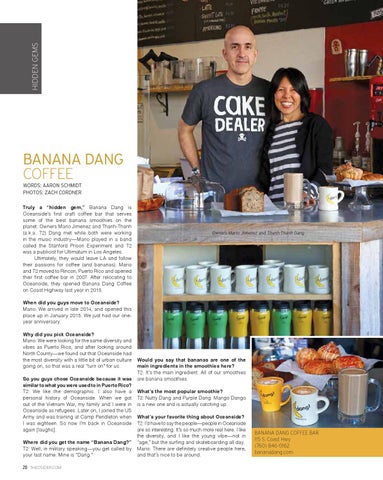 BANANA DANG COFFEE WORDS: AARON SCHMIDT PHOTOS: ZACH CORDNER Truly a “hidden gem,” Banana Dang is Oceanside’s first craft coffee bar that serves some of the best banana smoothies on the planet. Owners Mario Jimenez and Thanh-Thanh (a.k.a. T2) Dang met while both were working in the music industry—Mario played in a band called the Stanford Prison Experiment and T2 was a publicist for Ultimatum in Los Angeles. Ultimately, they would leave LA and follow their passions for coffee (and bananas). Mario and T2 moved to Rincon, Puerto Rico and opened their first coffee bar in 2007. After relocating to Oceanside, they opened Banana Dang Coffee on Coast Highway last year in 2015.

When did you guys move to Oceanside? Mario: We arrived in late 2014, and opened this place up in January 2015. We just had our oneyear anniversary. Why did you pick Oceanside? Mario: We were looking for the same diversity and vibes as Puerto Rico, and after looking around North County—we found out that Oceanside had the most diversity with a little bit of urban culture going on, so that was a real “turn on” for us. So you guys chose Oceanside because it was similar to what you were used to in Puerto Rico? T2: We like the demographic. I also have a personal history of Oceanside. When we got out of the Vietnam War, my family and I were in Oceanside as refugees. Later on, I joined the US Army and was training at Camp Pendleton when I was eighteen. So now I’m back in Oceanside again [laughs]. Where did you get the name “Banana Dang?” T2: Well, in military speaking—you get called by your last name. Mine is “Dang.”

Would you say that bananas are one of the main ingredients in the smoothies here? T2: It’s the main ingredient. All of our smoothies are banana smoothies. What’s the most popular smoothie? T2: Nutty Dang and Purple Dang. Mango Dango is a new one and is actually catching up. What’s your favorite thing about Oceanside? T2: I’d have to say the people—people in Oceanside are so interesting. It’s so much more real here. I like the diversity, and I like the young vibe—not in “age,” but the surfing and skateboarding all day. Mario: There are definitely creative people here, and that’s nice to be around. 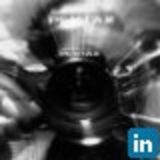