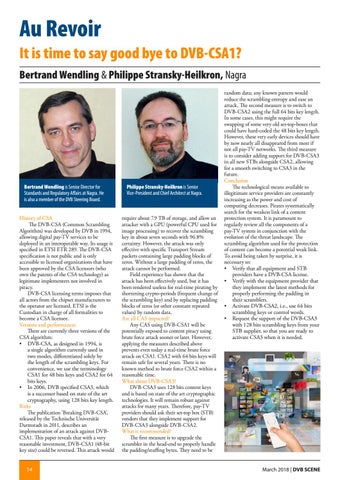 Bertrand Wendling is Senior Director for Standards and Regulatory Affairs at Nagra. He is also a member of the DVB Steering Board. History of CSA The DVB-CSA (Common Scrambling Algorithm) was developed by DVB in 1994, allowing digital pay-TV services to be deployed in an interoperable way. Its usage is specified in ETSI ETR 289. The DVB-CSA specification is not public and is only accessible to licensed organizations that have been approved by the CSA licensors (who own the patents of the CSA technology) as legitimate implementers not involved in piracy. DVB-CSA licensing terms imposes that all actors from the chipset manufacturers to the operator are licensed. ETSI is the Custodian in charge of all formalities to become a CSA licensee. Versions and performances There are currently three versions of the CSA algorithm: • DVB-CSA, as designed in 1994, is a single algorithm currently used in two modes, differentiated solely by the length of the scrambling keys. For convenience, we use the terminology CSA1 for 48 bits keys and CSA2 for 64 bits keys. • In 2006, DVB specified CSA3, which is a successor based on state of the art cryptography, using 128 bits key length. Risks The publication ‘Breaking DVB-CSA’, released by the Technische Universität Darmstadt in 2011, describes an implementation of an attack against DVBCSA1. This paper reveals that with a very reasonable investment, DVB-CSA1 (48-bit key size) could be reversed. This attack would 14

Philippe Stransky-Heilkron is Senior Vice-President and Chief Architect at Nagra.

require about 7.9 TB of storage, and allow an attacker with a GPU (powerful CPU used for image processing) to recover the scrambling key in about seven seconds with 96.8% certainty. However, the attack was only effective with specific Transport Stream packets containing large padding blocks of zeros. Without a large padding of zeros, the attack cannot be performed. Field experience has shown that the attack has been effectively used, but it has been rendered useless for real-time pirating by shortening crypto-periods (frequent change of the scrambling key) and by replacing padding blocks of zeros (or other constant repeated values) by random data. Are all CAS impacted? Any CAS using DVB-CSA1 will be potentially exposed to content piracy using brute force attack sooner or later. However, applying the measures described above prevents even today a real-time brute force attack on CSA1. CSA2 with 64 bits keys will remain safe for several years. There is no known method to brute force CSA2 within a reasonable time. What about DVB-CSA3? DVB-CSA3 uses 128 bits content keys and is based on state of the art cryptographic technologies. It will remain robust against attacks for many years. Therefore, pay-TV providers should ask their set-top box (STB) vendors that they implement support for DVB-CSA3 alongside DVB-CSA2. What is recommended? The first measure is to upgrade the scrambler in the head-end to properly handle the padding/stuffing bytes. They need to be

random data; any known pattern would reduce the scrambling entropy and ease an attack. The second measure is to switch to DVB-CSA2 using the full 64 bits key length. In some cases, this might require the swapping of some very old set-top-boxes that could have hard-coded the 48 bits key length. However, these very early devices should have by now nearly all disappeared from most if not all pay-TV networks. The third measure is to consider adding support for DVB-CSA3 in all new STBs alongside CSA2, allowing for a smooth switching to CSA3 in the future. Conclusion The technological means available to illegitimate service providers are constantly increasing as the power and cost of computing decreases. Pirates systematically search for the weakest link of a content protection system. It is paramount to regularly review all the components of a pay-TV system in conjunction with the evolution of the threat landscape. The scrambling algorithm used for the protection of content can become a potential weak link. To avoid being taken by surprise, it is necessary to: • Verify that all equipment and STB providers have a DVB-CSA license. • Verify with the equipment provider that they implement the latest methods for properly performing the padding in their scramblers. • Activate DVB-CSA2, i.e., use 64 bits scrambling keys or control words. • Request the support of the DVB-CSA3 with 128 bits scrambling keys from your STB supplier, so that you are ready to activate CSA3 when it is needed. 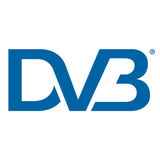 DVB Scene provides the latest news and information from DVB. In this issue we highlight the work that DVB is undertaking in 2018 as it celeb...

DVB Scene provides the latest news and information from DVB. In this issue we highlight the work that DVB is undertaking in 2018 as it celeb...