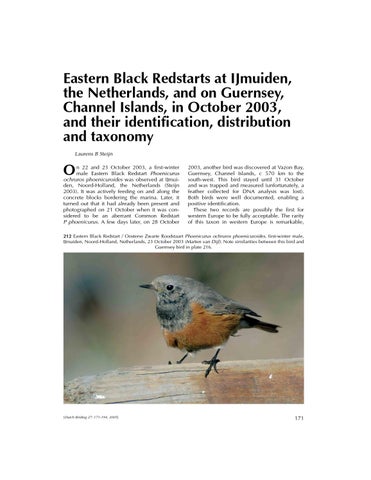 Eastern Black Redstarts at IJmuiden, the Netherlands, and on Guernsey, Channel Islands, in October 2003, and their identification, distribution and taxonomy Laurens B Steijn

n 22 and 23 October 2003, a first-winter male Eastern Black Redstart Phoenicurus ochruros phoenicuroides was observed at IJmuiden, Noord-Holland, the Netherlands (Steijn 2003). It was actively feeding on and along the concrete blocks bordering the marina. Later, it turned out that it had already been present and photographed on 21 October when it was considered to be an aberrant Common Redstart P phoenicurus. A few days later, on 28 October

2003, another bird was discovered at Vazon Bay, Guernsey, Channel Islands, c 570 km to the south-west. This bird stayed until 31 October and was trapped and measured (unfortunately, a feather collected for DNA analysis was lost). Both birds were well documented, enabling a positive identification. These two records are possibly the first for western Europe to be fully acceptable. The rarity of this taxon in western Europe is remarkable, 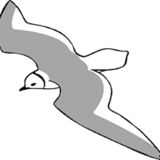