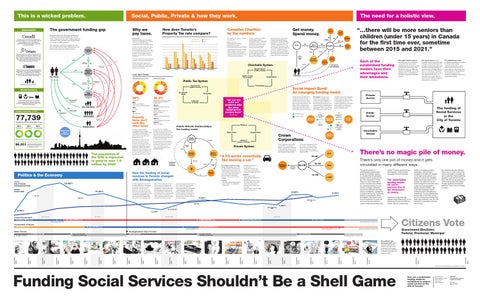 This is a wicked problem.

Based on a March 28, 2013 study conducted by the Mowat Centre titled Filling the Gap, Ontario funds a disproportionate share of federal spending compared to other provinces even though Ontario is no longer a wealthy province.

The study finds “that there is roughly an $11B structural gap between what Ontarians pay to the federal government and what they receive.

The provincial government has 26 ministries with the largest spending on the Ministry of Health and Longterm Care (38%) and the Ministry of Education (18%). Each ministry is mandated to administer financing to its specific social service under direction from the minister and the government of Ontario.

The City of Toronto has 47 divisions (including Parks and Recreation, Police Services, Waste Management, Water, etc.) , 2 corporations (Toronto Community Housing and Toronto Parking Authority) and oversees one body (The Toronto District School Board).

All citizens of the City of Toronto.

For the purpose of this project Social Service providers in the City of Toronto are defined as Education (TDSB), Shelter &amp; Support, Transit (TTC) and Toronto Public Health.

The population of the GTA is expected to grow to over 7.5 million by 2025

Gather money for a cause

Each of the established funding models have their advantages and their limitations.

Private Donations optionally give money through these mechanisms

Property taxes don’t work like other taxes: The City of Toronto, like all municipalities faces increased challenges in funding social services in part because of the taxation policies that are imposed by the Ontario Government.

to cover the rate of inflation. Property tax rate is tied directly to the City’s operating budget meaning that if the municipal government wants to generate more revenue from the existing property base they must increase the city’s budget.

An example: The pilot social impact bond in Peterborough Prison in the United Kingdom is a program to reduce reoffending rates of short term prisoners. £5m was raised from 17 social investors to fund a consortium of nonprofit organizations over six years to work with 3,000 prisoners after they are

The private system has an incredible ability to generate huge amounts of revenue however it is primarily motivated by profits and therefore any private funding of social services will likely require a return on investment. This return does not necessarily have to be a direct financial return but it is important to recognize that the success of this system hinges on individualistic motivations.

The philanthropic sector by definition provides a formalized mechanism that enables charitable individuals to give in order to help those who are in need. However, the system relies predominantly on the generosity of individual donors thus creating a challenge in long-term sustainable funding.

This means that as Toronto grows and the demand for social services increases the City has no choice but to “raise taxes” which in today’s political climate is a very unpopular position.

“ A P3 works essentially like leasing a car.” The Canadian Council for PublicPrivate Partnerships defines PPPs as, “A cooperative venture between the public and private sectors, built on the expertise of each partner, that best meets clearly defined public needs through the appropriate allocation of resources, risks and rewards.”

There’s no magic pile of money.

There’s only one pot of money and it gets circulated in many different ways.

Through the process of understanding complex public, private and charitable systems, it is revealed that the sustainable funding model for social services lies in the movement of money. There is no silver bullet when it comes to funding social services – the sustainable funding of social services is actually centralized around more efficiently allocating money to institutions, organizations or government that can systemically address social problems. When this happens, there doesn’t have to be an investment of money into services at the same extent as current funding and demand would

Negatives • loss of public control • public debt gets deferred into the future • private sector borrows money at a higher rate, therefore the project often costs more • contracts often ‘hidden’ from the public • project costs can be 16% higher than if government run

Crown corporations are peculiar hybrid entities—somewhere between a government body and a private enterprise. They are wholly owned by the state but operate at arm’s length from government.

Greater Toronto Area. A task force was convened to investigate the social and financial implications of amalgamation, which revealed that the most significant impact would be the download of social services (previously paid for or cost-shared by the province) to municipalities. In 1997, a referendum was held which indicated that 70-81% of voters

The funding of Social Services in the City of Toronto

The sustainable funding model for social services lies in the movement of money. created by the structural gap between what Ontarians pay to the federal government and what they receive. With the compounding

effects of the aging population, urbanization, and increased immigration escalating the stresses on the larger social systems, it is essential to think of the charitable, public, and private systems not in isolation, but rather how we can make transparent to the public which systems are best equipped to address specific problems. This would take advantage of each individual system’s strengths and experiences. The key understanding for the public is that if they do not pay for a social service through their taxes, they continue to carry the cost through the consumption of goods and services.

The public taxation system is an effective tool of collecting money from the citizens and redistributing those funds towards infrastructure and services that benefit the entire city. While this system is sustainable, due to the political cycle it is challenged in its ability to generate exponential revenue.

released to reduce their reoffending, measured by convictions. If the social impact bond delivers a drop in reoffending beyond 7.5%, investors will receive an increasing return capped at a maximum of 13% per year over an eight year period. (socialfinance.ca)

In 1994, Progressive Conservative Candidate Mike Harris campaigned for Premier of Ontario on a plan entitled the “Common Sense Revolution.” The plan promised to reduce the size of government and lower income taxes by 30%. In order to realize his campaign promises, Harris proposed an amalgamation plan of the six municipalities of the

deliver are required to pay taxes

How the funding of social services in Toronto changed with Amalagamation

Could borrow $ and fund directly at a lesser rate

According to a Fraser Institute report released in March 2012, “Canada’s immigrant selection policies resulted in an average fiscal burden on taxpayers of $6,051 per immigrant who came to Canada between 1987 and 2004.”

“…there will be more seniors than children (under 15 years) in Canada for the first time ever, sometime between 2015 and 2021.”

The number of tax-filers in Canada making charitable donations has been steadily decreasing from 30% in 1990 to 23% in 2011. As government funding to social

people moving to the city

Canada. Charities File indicates that the largest number of donations are given to healthcare organizations, leaving remaining charities focusing on the other areas of activity struggling to diversify their funding base.

What is the role of business?

49% of total revenues from Canada’s 85,000 charities come from government, and government funding of registered charities represents 14% of all government spending in

In the City of Toronto:

immigrants that arrived in Canada settled in Toronto

The activities of charities in Canada are limited to:

Where the $ comes(Housing, from Health,

of immigrants to Ontario settle in Toronto

Tax structure “A well-functioning tax and benefit system is an essential part of a healthy economy, a sustainable public infrastructure, and a strong democracy.

of immigrants to Canada settle in Ontario

Canadian Charities by the numbers

They then use this tax revenue to finance programs and services for Canadians.”

Why we pay taxes.

The tax revenue we collect each year is either given back to taxpayers in the form of benefit payments or tax credits, or is provided to the federal, provincial, territorial, and First Nations governments on whose behalf we collect the tax revenue.

The need for a holistic view.

The political cycle will repeat itself. Either the current government will be re-elected or the government will change which will have implications on funding, priorities and promises made.

A full list of resources/references are available in the paper.

How can a sustainable funding model be established to support social services in the City of Toronto? 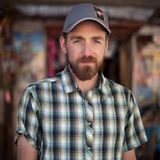