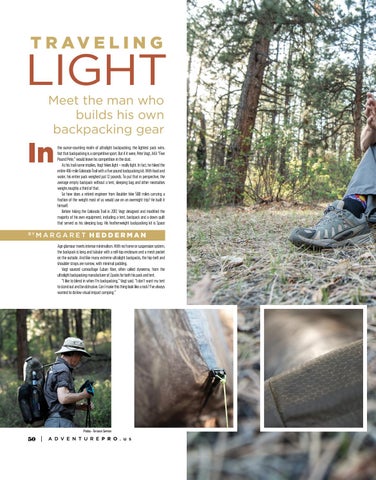 LIGHT Meet the man who builds his own backpacking gear

the ounce-counting realm of ultralight backpacking, the lightest pack wins. Not that backpacking is a competitive sport. But if it were, Pete Vogt, AKA “Five Pound Pete,” would leave his competition in the dust. As his trail name implies, Vogt hikes light – really light. In fact, he hiked the entire 486-mile Colorado Trail with a five pound backpacking kit. With food and water, his entire pack weighed just 12 pounds. To put that in perspective, the average empty backpack without a tent, sleeping bag and other necessities weighs roughly a third of that. So how does a retired engineer from Boulder hike 500 miles carrying a fraction of the weight most of us would use on an overnight trip? He built it himself. Before hiking the Colorado Trail in 2017, Vogt designed and modified the majority of his own equipment, including a tent, backpack and a down quilt that served as his sleeping bag. His featherweight backpacking kit is Space

MARGARET HEDDERMAN Age glamour meets intense minimalism. With no frame or suspension system, the backpack is long and tubular with a roll-top enclosure and a mesh pocket on the outside. And like many extreme ultralight backpacks, the hip-belt and shoulder straps are narrow, with minimal padding. Vogt sourced camouflage Cuban fiber, often called dyneema, from the ultralight backpacking manufacturer of Zpacks for both his pack and tent. “I like to blend in when I’m backpacking,” Vogt said. “I don’t want my tent to stand out and be obtrusive. Can I make this thing look like a rock? I’ve always wanted to do low visual impact camping.” 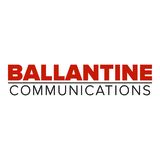