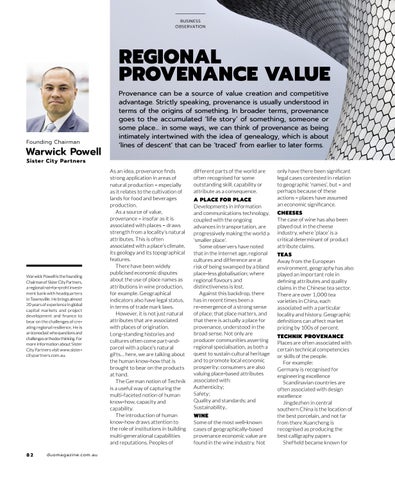 Provenance can be a source of value creation and competitive advantage. Strictly speaking, provenance is usually understood in terms of the origins of something. In broader terms, provenance goes to the accumulated ‘life story’ of something, someone or some place… in some ways, we can think of provenance as being intimately intertwined with the idea of genealogy, which is about ‘lines of descent’ that can be ‘traced’ from earlier to later forms.

Warwick Powell is the founding Chairman of Sister City Partners, a regional not-for-profit investment bank with headquarters in Townsville. He brings almost 20 years of experience in global capital markets and project development and finance to bear on the challenges of creating regional resilience. He is an iconoclast who questions and challenges orthodox thinking. For more information about Sister City Partners visit www.sistercitypartners.com.au.

As an idea, provenance finds strong application in areas of natural production – especially as it relates to the cultivation of lands for food and beverages production. As a source of value, provenance – insofar as it is associated with places – draws strength from a locality’s natural attributes. This is often associated with a place’s climate, its geology and its topographical features. There have been widely publicised economic disputes about the use of place names as attributions in wine production, for example. Geographical indicators also have legal status, in terms of trade mark laws. However, it is not just natural attributes that are associated with places of origination. Long-standing histories and cultures often come part-andparcel with a place’s natural gifts… here, we are talking about the human know-how that is brought to bear on the products at hand. The German notion of Technik is a useful way of capturing the multi-faceted notion of human know-how, capacity and capability. The introduction of human know-how draws attention to the role of institutions in building multi-generational capabilities and reputations. Peoples of

different parts of the world are often recognised for some outstanding skill, capability or attribute as a consequence. A PLACE FOR PLACE Developments in information and communications technology, coupled with the ongoing advances in transportation, are progressively making the world a ‘smaller place’. Some observers have noted that in the internet age, regional cultures and difference are at risk of being swamped by a bland place-less globalisation; where regional flavours and distinctiveness is lost. Against this backdrop, there has in recent times been a re-emergence of a strong sense of place; that place matters, and that there is actually a place for provenance, understood in the broad sense. Not only are producer communities asserting regional specialisation, as both a quest to sustain cultural heritage and to promote local economic prosperity; consumers are also valuing place-based attributes associated with: Authenticity; Safety; Quality and standards; and Sustainability.. WINE Some of the most well-known cases of geographically-based provenance economic value are found in the wine industry. Not

only have there been significant legal cases contested in relation to geographic ‘names’, but – and perhaps because of these actions – places have assumed an economic significance. CHEESES The case of wine has also been played out in the cheese industry, where ‘place’ is a critical determinant of product attribute claims. TEAS Away from the European environment, geography has also played an important role in defining attributes and quality claims in the Chinese tea sector. There are over 1,000 tea varieties in China, each associated with a particular locality and history. Geographic definitions can affect market pricing by 100s of percent. TECHNIK PROVENANCE Places are often associated with certain technical competencies or skills of the people. For example: Germany is recognised for engineering excellence Scandinavian countries are often associated with design excellence Jingdezhen in central southern China is the location of the best porcelain, and not far from there Xuancheng is recognised as producing the best calligraphy papers Sheffield became known for

DUO becomes The North’s Magazine for Women.  From January 2019, and 12 years since launching, DUO Magazine is broadening its reach and readership, north and south as The North’s Magazine for Women – a bi monthly publication produced in Townsville and distributed region wide. From Mackay and The Whitsundays in the south to Cairns and Port Douglas in the north, Mt Isa to the west and all the interesting coastal and rural communities in between. This is a big, bold and exciting step and one that DUO’s team has spent much time planning to ensure it is done right - the DUO way. 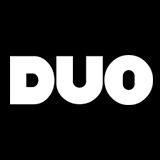