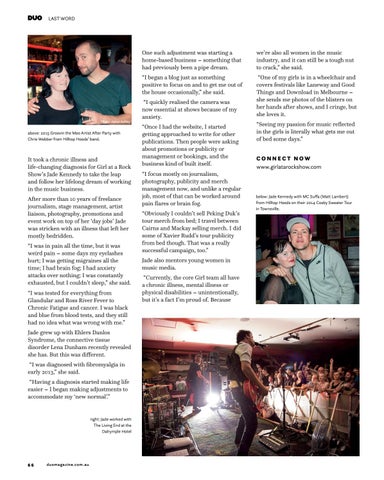 above: 2015 Groovin the Moo Artist After Party with Chris Webber from Hilltop Hoods’ band.

It took a chronic illness and life-changing diagnosis for Girl at a Rock Show’s Jade Kennedy to take the leap and follow her lifelong dream of working in the music business. After more than 10 years of freelance journalism, stage management, artist liaison, photography, promotions and event work on top of her ‘day jobs’ Jade was stricken with an illness that left her mostly bedridden. “I was in pain all the time, but it was weird pain – some days my eyelashes hurt; I was getting migraines all the time; I had brain fog; I had anxiety attacks over nothing; I was constantly exhausted, but I couldn’t sleep,” she said. “I was tested for everything from Glandular and Ross River Fever to Chronic Fatigue and cancer. I was black and blue from blood tests, and they still had no idea what was wrong with me.” Jade grew up with Ehlers Danlos Syndrome, the connective tissue disorder Lena Dunham recently revealed she has. But this was different. “I was diagnosed with fibromyalgia in early 2013,” she said. “Having a diagnosis started making life easier – I began making adjustments to accommodate my ‘new normal’.”

right: Jade worked with The Living End at the Dalrymple Hotel

One such adjustment was starting a home-based business – something that had previously been a pipe dream.

we’re also all women in the music industry, and it can still be a tough nut to crack,” she said.

“I began a blog just as something positive to focus on and to get me out of the house occasionally,” she said.

“One of my girls is in a wheelchair and covers festivals like Laneway and Good Things and Download in Melbourne – she sends me photos of the blisters on her hands after shows, and I cringe, but she loves it.

“I quickly realised the camera was now essential at shows because of my anxiety. “Once I had the website, I started getting approached to write for other publications. Then people were asking about promotions or publicity or management or bookings, and the business kind of built itself. “I focus mostly on journalism, photography, publicity and merch management now, and unlike a regular job, most of that can be worked around pain flares or brain fog. “Obviously I couldn’t sell Peking Duk’s tour merch from bed; I travel between Cairns and Mackay selling merch. I did some of Xavier Rudd’s tour publicity from bed though. That was a really successful campaign, too.” Jade also mentors young women in music media. “Currently, the core Girl team all have a chronic illness, mental illness or physical disabilities – unintentionally, but it’s a fact I’m proud of. Because

“Seeing my passion for music reflected in the girls is literally what gets me out of bed some days.” CONNECT NOW www.girlatarockshow.com

below: Jade Kennedy with MC Suffa (Matt Lambert) from Hilltop Hoods on their 2014 Cosby Sweater Tour in Townsville.