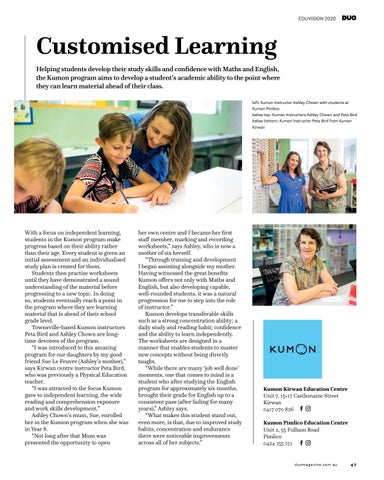 With a focus on independent learning, students in the Kumon program make progress based on their ability rather than their age. Every student is given an initial assessment and an individualised study plan is created for them. Students then practise worksheets until they have demonstrated a sound understanding of the material before progressing to a new topic. In doing so, students eventually reach a point in the program where they are learning material that is ahead of their school grade level. Townsville-based Kumon instructors Peta Bird and Ashley Chown are longtime devotees of the program. “I was introduced to this amazing program for our daughters by my good friend Sue Le Feuvre (Ashley’s mother),” says Kirwan centre instructor Peta Bird, who was previously a Physical Education teacher. “I was attracted to the focus Kumon gave to independent learning, the wide reading and comprehension exposure and work skills development.” Ashley Chown’s mum, Sue, enrolled her in the Kumon program when she was in Year 8. “Not long after that Mum was presented the opportunity to open

her own centre and I became her first staff member, marking and recording worksheets,” says Ashley, who is now a mother of six herself. “Through training and development I began assisting alongside my mother. Having witnessed the great benefits Kumon offers not only with Maths and English, but also developing capable, well-rounded students, it was a natural progression for me to step into the role of instructor.” Kumon develops transferable skills such as a strong concentration ability; a daily study and reading habit; confidence and the ability to learn independently. The worksheets are designed in a manner that enables students to master new concepts without being directly taught. “While there are many ‘job well done’ moments, one that comes to mind is a student who after studying the English program for approximately six months, brought their grade for English up to a consistent pass (after failing for many years),” Ashley says. “What makes this student stand out, even more, is that, due to improved study habits, concentration and endurance there were noticeable improvements across all of her subjects.”