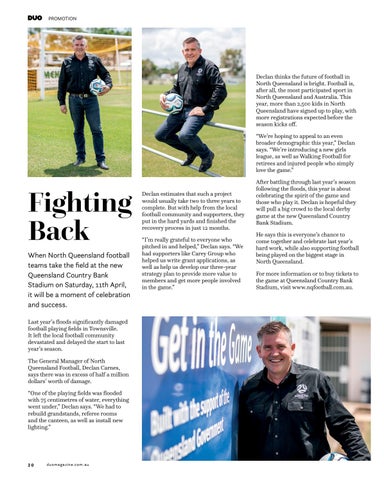 Declan thinks the future of football in North Queensland is bright. Football is, after all, the most participated sport in North Queensland and Australia. This year, more than 2,500 kids in North Queensland have signed up to play, with more registrations expected before the season kicks off. “We’re hoping to appeal to an even broader demographic this year,” Declan says. “We’re introducing a new girls league, as well as Walking Football for retirees and injured people who simply love the game.”

Fighting Back When North Queensland football teams take the field at the new Queensland Country Bank Stadium on Saturday, 11th April, it will be a moment of celebration and success. Last year’s floods significantly damaged football playing fields in Townsville. It left the local football community devastated and delayed the start to last year’s season. The General Manager of North Queensland Football, Declan Carnes, says there was in excess of half a million dollars’ worth of damage. “One of the playing fields was flooded with 75 centimetres of water, everything went under,” Declan says. “We had to rebuild grandstands, referee rooms and the canteen, as well as install new lighting.”

Declan estimates that such a project would usually take two to three years to complete. But with help from the local football community and supporters, they put in the hard yards and finished the recovery process in just 12 months. “I’m really grateful to everyone who pitched in and helped,” Declan says. “We had supporters like Carey Group who helped us write grant applications, as well as help us develop our three-year strategy plan to provide more value to members and get more people involved in the game.”

After battling through last year’s season following the floods, this year is about celebrating the spirit of the game and those who play it. Declan is hopeful they will pull a big crowd to the local derby game at the new Queensland Country Bank Stadium. He says this is everyone’s chance to come together and celebrate last year’s hard work, while also supporting football being played on the biggest stage in North Queensland. For more information or to buy tickets to the game at Queensland Country Bank Stadium, visit www.nqfootball.com.au.