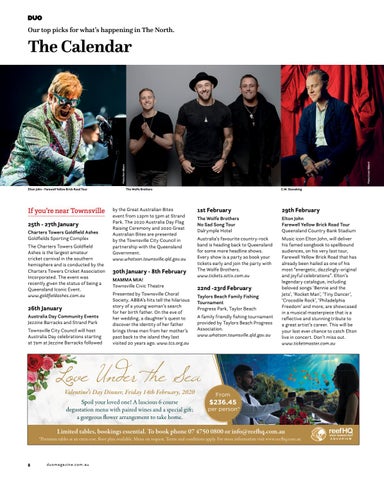 Our top picks for what’s happening in The North.

30th January - 8th February MAMMA MIA! Townsville Civic Theatre Presented by Townsville Choral Society. ABBA’s hits tell the hilarious story of a young woman’s search for her birth father. On the eve of her wedding, a daughter’s quest to discover the identity of her father brings three men from her mother’s past back to the island they last visited 20 years ago. www.tcs.org.au

Australia’s favourite country-rock band is heading back to Queensland for some more headline shows. Every show is a party so book your tickets early and join the party with The Wolfe Brothers. www.tickets.oztix.com.au

Music icon Elton John, will deliver his famed songbook to spellbound audiences, on his very last tour, Farewell Yellow Brick Road that has already been hailed as one of his most “energetic, dazzlingly-original and joyful celebrations”. Elton’s legendary catalogue, including beloved songs ‘Bennie and the Jets’, ‘Rocket Man’, ‘Tiny Dancer’, ‘Crocodile Rock’, ‘Philadelphia Freedom’ and more, are showcased in a musical masterpiece that is a reflective and stunning tribute to a great artist’s career. This will be your last ever chance to catch Elton live in concert. Don’t miss out. www.ticketmaster.com.au