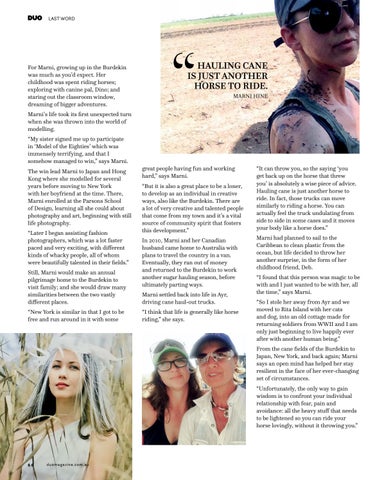 For Marni, growing up in the Burdekin was much as you’d expect. Her childhood was spent riding horses; exploring with canine pal, Dino; and staring out the classroom window, dreaming of bigger adventures.

HAULING CANE IS JUST ANOTHER HORSE TO RIDE. MARNI HINE

Marni’s life took its first unexpected turn when she was thrown into the world of modelling. “My sister signed me up to participate in ‘Model of the Eighties’ which was immensely terrifying, and that I somehow managed to win,” says Marni. The win lead Marni to Japan and Hong Kong where she modelled for several years before moving to New York with her boyfriend at the time. There, Marni enrolled at the Parsons School of Design, learning all she could about photography and art, beginning with still life photography. “Later I began assisting fashion photographers, which was a lot faster paced and very exciting, with different kinds of whacky people, all of whom were beautifully talented in their fields.” Still, Marni would make an annual pilgrimage home to the Burdekin to visit family; and she would draw many similarities between the two vastly different places. “New York is similar in that I got to be free and run around in it with some

great people having fun and working hard,” says Marni. “But it is also a great place to be a loner, to develop as an individual in creative ways, also like the Burdekin. There are a lot of very creative and talented people that come from my town and it’s a vital source of community spirit that fosters this development.” In 2010, Marni and her Canadian husband came home to Australia with plans to travel the country in a van. Eventually, they ran out of money and returned to the Burdekin to work another sugar hauling season, before ultimately parting ways. Marni settled back into life in Ayr, driving cane haul-out trucks. “I think that life is generally like horse riding,” she says.

“It can throw you, so the saying ‘you get back up on the horse that threw you’ is absolutely a wise piece of advice. Hauling cane is just another horse to ride. In fact, those trucks can move similarly to riding a horse. You can actually feel the truck undulating from side to side in some cases and it moves your body like a horse does.” Marni had planned to sail to the Caribbean to clean plastic from the ocean, but life decided to throw her another surprise, in the form of her childhood friend, Deb. “I found that this person was magic to be with and I just wanted to be with her, all the time,” says Marni. “So I stole her away from Ayr and we moved to Rita Island with her cats and dog, into an old cottage made for returning soldiers from WWII and I am only just beginning to live happily ever after with another human being.” From the cane fields of the Burdekin to Japan, New York, and back again; Marni says an open mind has helped her stay resilient in the face of her ever-changing set of circumstances. “Unfortunately, the only way to gain wisdom is to confront your individual relationship with fear, pain and avoidance: all the heavy stuff that needs to be lightened so you can ride your horse lovingly, without it throwing you.”