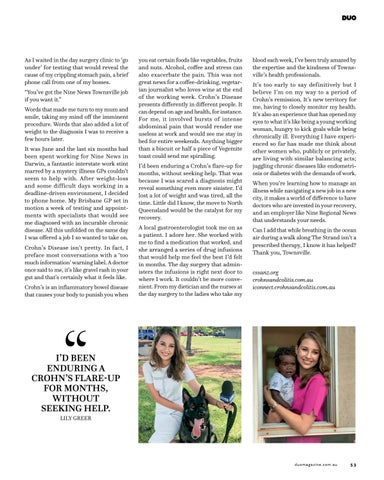 As I waited in the day surgery clinic to ‘go under’ for testing that would reveal the cause of my crippling stomach pain, a brief phone call from one of my bosses. “You’ve got the Nine News Townsville job if you want it.” Words that made me turn to my mum and smile, taking my mind off the imminent procedure. Words that also added a lot of weight to the diagnosis I was to receive a few hours later. It was June and the last six months had been spent working for Nine News in Darwin, a fantastic interstate work stint marred by a mystery illness GPs couldn’t seem to help with. After weight-loss and some difficult days working in a deadline-driven environment, I decided to phone home. My Brisbane GP set in motion a week of testing and appointments with specialists that would see me diagnosed with an incurable chronic disease. All this unfolded on the same day I was offered a job I so wanted to take on. Crohn’s Disease isn’t pretty. In fact, I preface most conversations with a ‘too much information’ warning label. A doctor once said to me, it’s like gravel rash in your gut and that’s certainly what it feels like. Crohn’s is an inflammatory bowel disease that causes your body to punish you when

you eat certain foods like vegetables, fruits and nuts. Alcohol, coffee and stress can also exacerbate the pain. This was not great news for a coffee-drinking, vegetarian journalist who loves wine at the end of the working week. Crohn’s Disease presents differently in different people. It can depend on age and health, for instance. For me, it involved bursts of intense abdominal pain that would render me useless at work and would see me stay in bed for entire weekends. Anything bigger than a biscuit or half a piece of Vegemite toast could send me spiralling. I’d been enduring a Crohn’s flare-up for months, without seeking help. That was because I was scared a diagnosis might reveal something even more sinister. I’d lost a lot of weight and was tired, all the time. Little did I know, the move to North Queensland would be the catalyst for my recovery. A local gastroenterologist took me on as a patient. I adore her. She worked with me to find a medication that worked, and she arranged a series of drug infusions that would help me feel the best I’d felt in months. The day surgery that administers the infusions is right next door to where I work. It couldn’t be more convenient. From my dietician and the nurses at the day surgery to the ladies who take my

blood each week, I’ve been truly amazed by the expertise and the kindness of Townsville’s health professionals. It’s too early to say definitively but I believe I’m on my way to a period of Crohn’s remission. It’s new territory for me, having to closely monitor my health. It’s also an experience that has opened my eyes to what it’s like being a young working woman, hungry to kick goals while being chronically ill. Everything I have experienced so far has made me think about other women who, publicly or privately, are living with similar balancing acts; juggling chronic diseases like endometriosis or diabetes with the demands of work. When you’re learning how to manage an illness while navigating a new job in a new city, it makes a world of difference to have doctors who are invested in your recovery, and an employer like Nine Regional News that understands your needs. Can I add that while breathing in the ocean air during a walk along The Strand isn’t a prescribed therapy, I know it has helped? Thank you, Townsville. cssanz.org crohnsandcolitis.com.au iconnect.crohnsandcolitis.com.au

I’D BEEN ENDURING A CROHN’S FLARE-UP FOR MONTHS, WITHOUT SEEKING HELP. LILY GREER