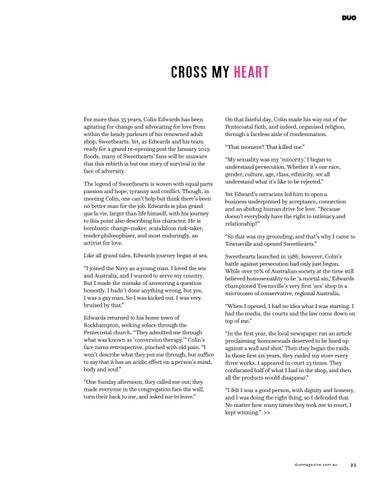 CROSS MY HEART For more than 35 years, Colin Edwards has been agitating for change and advocating for love from within the heady parlours of his renowned adult shop, Sweethearts. Yet, as Edwards and his team ready for a grand re-opening post the January 2019 floods, many of Sweethearts’ fans will be unaware that this rebirth is but one story of survival in the face of adversity. The legend of Sweethearts is woven with equal parts passion and hope, tyranny and conflict. Though, in meeting Colin, one can’t help but think there’s been no better man for the job. Edwards is plus grand que la vie, larger than life himself, with his journey to this point also describing his character. He is bombastic change-maker, scandalous risk-taker, tender philosophiser, and most enduringly, an activist for love. Like all grand tales, Edwards journey began at sea. “I joined the Navy as a young man. I loved the sea and Australia, and I wanted to serve my country. But I made the mistake of answering a question honestly. I hadn’t done anything wrong, but yes, I was a gay man. So I was kicked out. I was very bruised by that.” Edwards returned to his home town of Rockhampton, seeking solace through the Pentecostal church. “They admitted me through what was known as ‘conversion therapy.’” Colin’s face turns retrospective, pinched with old pain. “I won’t describe what they put me through, but suffice to say that it has an acidic effect on a person’s mind, body and soul.” “One Sunday afternoon, they called me out; they made everyone in the congregation face the wall, turn their back to me, and asked me to leave.”

On that fateful day, Colin made his way out of the Pentecostal faith, and indeed, organised religion, through a faceless aisle of condemnation. “That moment? That killed me.” “My sexuality was my ‘minority.’ I began to understand persecution. Whether it’s our race, gender, culture, age, class, ethnicity, we all understand what it’s like to be rejected.” Yet Edward’s ostracism led him to open a business underpinned by acceptance, connection and an abiding human drive for love. “Because doesn’t everybody have the right to intimacy and relationship?” “So that was my grounding, and that’s why I came to Townsville and opened Sweethearts.” Sweethearts launched in 1986, however, Colin’s battle against persecution had only just begun. While over 70% of Australian society at the time still believed homosexuality to be ‘a mortal sin,’ Edwards championed Townsville’s very first ‘sex’ shop in a microcosm of conservative, regional Australia. “When I opened, I had no idea what I was starting. I had the media, the courts and the law come down on top of me.” “In the first year, the local newspaper ran an article proclaiming ‘homosexuals deserved to be lined up against a wall and shot.’ Then they began the raids. In those first six years, they raided my store every three weeks. I appeared in court 23 times. They confiscated half of what I had in the shop, and then all the products would disappear.” “I felt I was a good person, with dignity and honesty, and I was doing the right thing, so I defended that. No matter how many times they took me to court, I kept winning.” >>