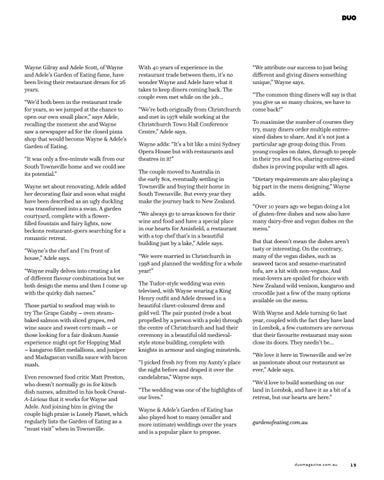 Wayne Gilray and Adele Scott, of Wayne and Adele’s Garden of Eating fame, have been living their restaurant dream for 26 years. “We’d both been in the restaurant trade for years, so we jumped at the chance to open our own small place,” says Adele, recalling the moment she and Wayne saw a newspaper ad for the closed pizza shop that would become Wayne & Adele’s Garden of Eating. “It was only a five-minute walk from our South Townsville home and we could see its potential.” Wayne set about renovating, Adele added her decorating flair and soon what might have been described as an ugly duckling was transformed into a swan. A garden courtyard, complete with a flowerfilled fountain and fairy lights, now beckons restaurant-goers searching for a romantic retreat. “Wayne’s the chef and I’m front of house,” Adele says. “Wayne really delves into creating a lot of different flavour combinations but we both design the menu and then I come up with the quirky dish names.” Those partial to seafood may wish to try The Grape Gatsby – oven steambaked salmon with sliced grapes, red wine sauce and sweet corn mash – or those looking for a fair dinkum Aussie experience might opt for Hopping Mad – kangaroo fillet medallions, and juniper and Madagascan vanilla sauce with bacon mash. Even renowned food critic Matt Preston, who doesn’t normally go in for kitsch dish names, admitted in his book CravatA-Licious that it works for Wayne and Adele. And joining him in giving the couple high praise is Lonely Planet, which regularly lists the Garden of Eating as a “must visit” when in Townsville.

With 40 years of experience in the restaurant trade between them, it’s no wonder Wayne and Adele have what it takes to keep diners coming back. The couple even met while on the job… “We’re both originally from Christchurch and met in 1978 while working at the Christchurch Town Hall Conference Centre,” Adele says. Wayne adds: “It’s a bit like a mini Sydney Opera House but with restaurants and theatres in it!” The couple moved to Australia in the early 80s, eventually settling in Townsville and buying their home in South Townsville. But every year they make the journey back to New Zealand. “We always go to areas known for their wine and food and have a special place in our hearts for Amisfield, a restaurant with a top chef that’s in a beautiful building just by a lake,” Adele says. “We were married in Christchurch in 1998 and planned the wedding for a whole year!” The Tudor-style wedding was even televised, with Wayne wearing a King Henry outfit and Adele dressed in a beautiful claret-coloured dress and gold veil. The pair punted (rode a boat propelled by a person with a pole) through the centre of Christchurch and had their ceremony in a beautiful old medievalstyle stone building, complete with knights in armour and singing minstrels. “I picked fresh ivy from my Aunty’s place the night before and draped it over the candelabras,” Wayne says. “The wedding was one of the highlights of our lives.” Wayne & Adele’s Garden of Eating has also played host to many (smaller and more intimate) weddings over the years and is a popular place to propose.

“We attribute our success to just being different and giving diners something unique,” Wayne says. “The common thing diners will say is that you give us so many choices, we have to come back!” To maximise the number of courses they try, many diners order multiple entreesized dishes to share. And it’s not just a particular age group doing this. From young couples on dates, through to people in their 70s and 80s, sharing entree-sized dishes is proving popular with all ages. “Dietary requirements are also playing a big part in the menu designing,” Wayne adds. “Over 10 years ago we began doing a lot of gluten-free dishes and now also have many dairy-free and vegan dishes on the menu.” But that doesn’t mean the dishes aren’t tasty or interesting. On the contrary, many of the vegan dishes, such as seaweed tacos and sesame-marinated tofu, are a hit with non-vegans. And meat-lovers are spoiled for choice with New Zealand wild venison, kangaroo and crocodile just a few of the many options available on the menu. With Wayne and Adele turning 60 last year, coupled with the fact they have land in Lombok, a few customers are nervous that their favourite restaurant may soon close its doors. They needn’t be… “We love it here in Townsville and we’re as passionate about our restaurant as ever,” Adele says. “We’d love to build something on our land in Lombok, and have it as a bit of a retreat, but our hearts are here.”