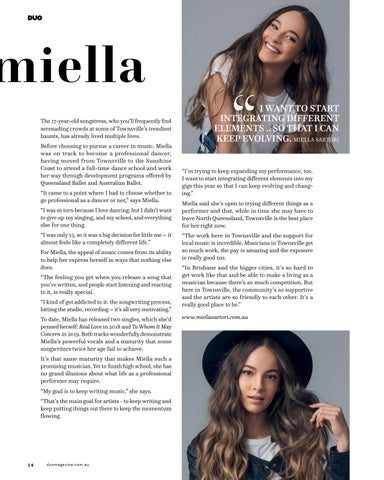 miella The 17-year-old songstress, who you’ll frequently find serenading crowds at some of Townsville’s trendiest haunts, has already lived multiple lives. Before choosing to pursue a career in music, Miella was on track to become a professional dancer, having moved from Townsville to the Sunshine Coast to attend a full-time dance school and work her way through development programs offered by Queensland Ballet and Australian Ballet. “It came to a point where I had to choose whether to go professional as a dancer or not,” says Miella. “I was so torn because I love dancing, but I didn’t want to give up my singing, and my school, and everything else for one thing. “I was only 13, so it was a big decision for little me – it almost feels like a completely different life.” For Miella, the appeal of music comes from its ability to help her express herself in ways that nothing else does. “The feeling you get when you release a song that you’ve written, and people start listening and reacting to it, is really special. “I kind of got addicted to it: the songwriting process, hitting the studio, recording – it’s all very motivating.” To date, Miella has released two singles, which she’d penned herself: Real Love in 2018 and To Whom It May Concern in 2019. Both tracks wonderfully demonstrate Miella’s powerful vocals and a maturity that some songwriters twice her age fail to achieve. It’s that same maturity that makes Miella such a promising musician. Yet to finish high school, she has no grand illusions about what life as a professional performer may require. “My goal is to keep writing music,” she says. “That’s the main goal for artists - to keep writing and keep putting things out there to keep the momentum flowing.

I WANT TO START INTEGRATING DIFFERENT ELEMENTS .. SO THAT I CAN KEEP EVOLVING. MIELLA SARTORI “I’m trying to keep expanding my performance, too. I want to start integrating different elements into my gigs this year so that I can keep evolving and changing.” Miella said she’s open to trying different things as a performer and that, while in time she may have to leave North Queensland, Townsville is the best place for her right now. “The work here in Townsville and the support for local music is incredible. Musicians in Townsville get so much work, the pay is amazing and the exposure is really good too. “In Brisbane and the bigger cities, it’s so hard to get work like that and be able to make a living as a musician because there’s so much competition. But here in Townsville, the community’s so supportive and the artists are so friendly to each other. It’s a really good place to be.” www.miellasartori.com.au