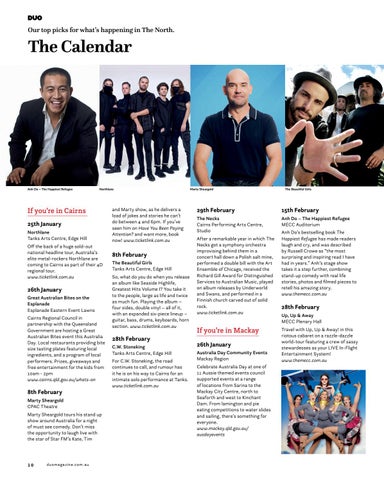 Our top picks for what’s happening in The North.

Anh Do – The Happiest Refugee

If you’re in Cairns 25th January Northlane Tanks Arts Centre, Edge Hill Off the back of a huge sold-out national headline tour, Australia’s elite metal-rockers Northlane are coming to Cairns as part of their 4D regional tour. www.ticketlink.com.au

8th February Marty Sheargold CPAC Theatre Marty Sheargold tours his stand up show around Australia for a night of must see comedy. Don’t miss the opportunity to laugh live with the star of Star FM’s Kate, Tim

and Marty show, as he delivers a load of jokes and stories he can’t do between 4 and 6pm. If you’ve seen him on Have You Been Paying Attention? and want more, book now! www.ticketlink.com.au

8th February The Beautiful Girls Tanks Arts Centre, Edge Hill So, what do you do when you release an album like Seaside Highlife, Greatest Hits Volume I? You take it to the people, large as life and twice as much fun. Playing the album – four sides, double vinyl – all of it, with an expanded six-piece lineup – guitar, bass, drums, keyboards, horn section. www.ticketlink.com.au

28th February C.W. Stoneking Tanks Arts Centre, Edge Hill For C.W. Stoneking, the road continues to call, and rumour has it he is on his way to Cairns for an intimate solo performance at Tanks. www.ticketlink.com.au

After a remarkable year in which The Necks got a symphony orchestra improvising behind them in a concert hall down a Polish salt mine, performed a double bill with the Art Ensemble of Chicago, received the Richard Gill Award for Distinguished Services to Australian Music, played on album releases by Underworld and Swans, and performed in a Finnish church carved out of solid rock. www.ticketlink.com.au

If you’re in Mackay 26th January Australia Day Community Events Mackay Region Celebrate Australia Day at one of 11 Aussie themed events council supported events at a range of locations from Sarina to the Mackay City Centre, north to Seaforth and west to Kinchant Dam. From lamington and pie eating competitions to water slides and sailing, there’s something for everyone. www.mackay.qld.gov.au/ ausdayevents

Anh Do’s bestselling book The Happiest Refugee has made readers laugh and cry, and was described by Russell Crowe as “the most surprising and inspiring read I have had in years.” Anh’s stage show takes it a step further, combining stand-up comedy with real life stories, photos and filmed pieces to retell his amazing story. www.themecc.com.au

28th February Up, Up & Away MECC Plenary Hall Travel with Up, Up & Away! in this riotous cabaret on a razzle-dazzle world-tour featuring a crew of sassy stewardesses as your LIVE In-Flight Entertainment System! www.themecc.com.au