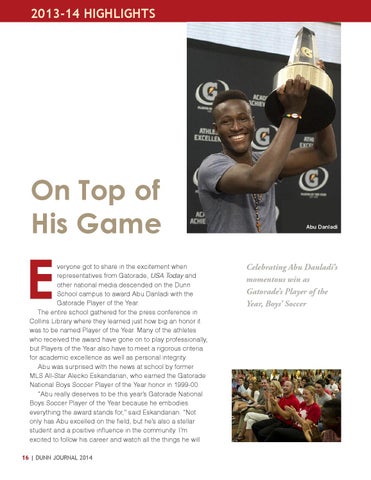 On Top of His Game veryone got to share in the excitement when representatives from Gatorade, USA Today and other national media descended on the Dunn School campus to award Abu Danladi with the Gatorade Player of the Year. The entire school gathered for the press conference in Collins Library where they learned just how big an honor it was to be named Player of the Year. Many of the athletes who received the award have gone on to play professionally, but Players of the Year also have to meet a rigorous criteria for academic excellence as well as personal integrity. Abu was surprised with the news at school by former MLS All-Star Alecko Eskandarian, who earned the Gatorade National Boys Soccer Player of the Year honor in 1999-00. “Abu really deserves to be this year’s Gatorade National Boys Soccer Player of the Year because he embodies everything the award stands for,” said Eskandarian. “Not only has Abu excelled on the field, but he’s also a stellar student and a positive influence in the community. I’m excited to follow his career and watch all the things he will 16 | DUNN JOURNAL 2014