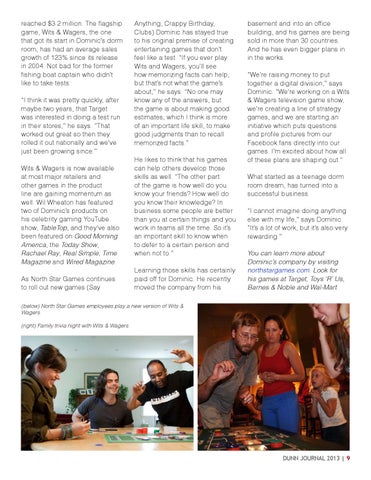 reached $3.2 million. The flagship game, Wits & Wagers, the one that got its start in Dominic’s dorm room, has had an average sales growth of 123% since its release in 2004. Not bad for the former fishing boat captain who didn’t like to take tests. “I think it was pretty quickly, after maybe two years, that Target was interested in doing a test run in their stores,” he says. “That worked out great so then they rolled it out nationally and we’ve just been growing since.” Wits & Wagers is now available at most major retailers and other games in the product line are gaining momentum as well. Wil Wheaton has featured two of Dominic’s products on his celebrity gaming YouTube show, TableTop, and they’ve also been featured on Good Morning America, the Today Show, Rachael Ray, Real Simple, Time Magazine and Wired Magazine. As North Star Games continues to roll out new games (Say

Anything, Crappy Birthday, Clubs) Dominic has stayed true to his original premise of creating entertaining games that don’t feel like a test. “If you ever play Wits and Wagers, you’ll see how memorizing facts can help, but that’s not what the game’s about,” he says. “No one may know any of the answers, but the game is about making good estimates, which I think is more of an important life skill, to make good judgments than to recall memorized facts.” He likes to think that his games can help others develop those skills as well. “The other part of the game is how well do you know your friends? How well do you know their knowledge? In business some people are better than you at certain things and you work in teams all the time. So it’s an important skill to know when to defer to a certain person and when not to.” Learning those skills has certainly paid off for Dominic. He recently moved the company from his

basement and into an office building, and his games are being sold in more than 30 countries. And he has even bigger plans in in the works. “We’re raising money to put together a digital division,” says Dominic. “We’re working on a Wits & Wagers television game show, we’re creating a line of strategy games, and we are starting an initiative which puts questions and profile pictures from our Facebook fans directly into our games. I’m excited about how all of these plans are shaping out.” What started as a teenage dorm room dream, has turned into a successful business. “I cannot imagine doing anything else with my life,” says Dominic. “It’s a lot of work, but it’s also very rewarding.” You can learn more about Dominic’s company by visiting northstargames.com. Look for his games at Target, Toys ‘R’ Us, Barnes & Noble and Wal-Mart.