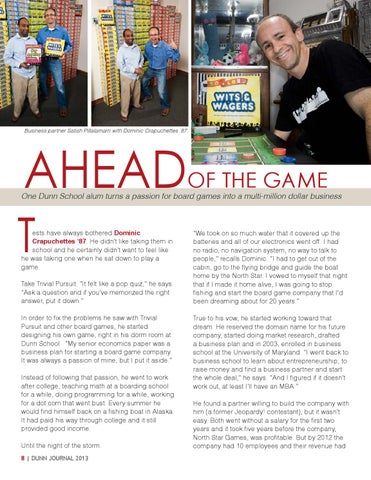 ests have always bothered Dominic Crapuchettes ‘87. He didn’t like taking them in school and he certainly didn’t want to feel like he was taking one when he sat down to play a game. Take Trivial Pursuit. “It felt like a pop quiz,” he says. “Ask a question and if you’ve memorized the right answer, put it down.” In order to fix the problems he saw with Trivial Pursuit and other board games, he started designing his own game, right in his dorm room at Dunn School. “My senior economics paper was a business plan for starting a board game company. It was always a passion of mine, but I put it aside.” Instead of following that passion, he went to work after college, teaching math at a boarding school for a while, doing programming for a while, working for a dot com that went bust. Every summer he would find himself back on a fishing boat in Alaska. It had paid his way through college and it still provided good income. Until the night of the storm. 8 | DUNN JOURNAL 2013

“We took on so much water that it covered up the batteries and all of our electronics went off. I had no radio, no navigation system, no way to talk to people,” recalls Dominic. “I had to get out of the cabin, go to the flying bridge and guide the boat home by the North Star. I vowed to myself that night that if I made it home alive, I was going to stop fishing and start the board game company that I’d been dreaming about for 20 years.” True to his vow, he started working toward that dream. He reserved the domain name for his future company, started doing market research, drafted a business plan and in 2003, enrolled in business school at the University of Maryland. “I went back to business school to learn about entrepreneurship, to raise money and find a business partner and start the whole deal,” he says. “And I figured if it doesn’t work out, at least I’ll have an MBA.” He found a partner willing to build the company with him (a former Jeopardy! contestant), but it wasn’t easy. Both went without a salary for the first two years and it took five years before the company, North Star Games, was profitable. But by 2012 the company had 10 employees and their revenue had