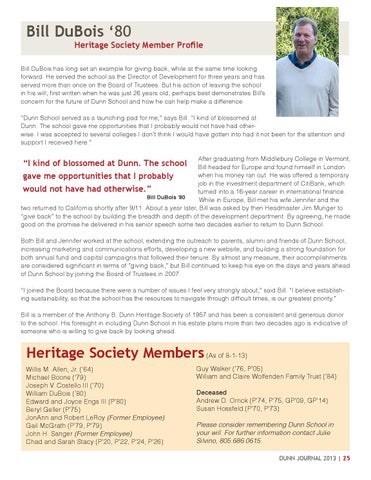 Bill DuBois has long set an example for giving back, while at the same time looking forward. He served the school as the Director of Development for three years and has served more than once on the Board of Trustees. But his action of leaving the school in his will, first written when he was just 26 years old, perhaps best demonstrates Bill’s concern for the future of Dunn School and how he can help make a difference. “Dunn School served as a launching pad for me,” says Bill. “I kind of blossomed at Dunn. The school gave me opportunities that I probably would not have had otherwise. I was accepted to several colleges I don’t think I would have gotten into had it not been for the attention and support I received here.” After graduating from Middlebury College in Vermont, Bill headed for Europe and found himself in London when his money ran out. He was offered a temporary job in the investment department of CitiBank, which turned into a 16-year career in international finance. Bill DuBois ‘80 While in Europe, Bill met his wife Jennifer and the two returned to California shortly after 9/11. About a year later, Bill was asked by then Headmaster Jim Munger to “give back” to the school by building the breadth and depth of the development department. By agreeing, he made good on the promise he delivered in his senior speech some two decades earlier to return to Dunn School.

“I kind of blossomed at Dunn. The school gave me opportunities that I probably would not have had otherwise.”

Both Bill and Jennifer worked at the school, extending the outreach to parents, alumni and friends of Dunn School, increasing marketing and communications efforts, developing a new website, and building a strong foundation for both annual fund and capital campaigns that followed their tenure. By almost any measure, their accomplishments are considered significant in terms of “giving back,” but Bill continued to keep his eye on the days and years ahead of Dunn School by joining the Board of Trustees in 2007. “I joined the Board because there were a number of issues I feel very strongly about,” said Bill. “I believe establishing sustainability, so that the school has the resources to navigate through difficult times, is our greatest priority.” Bill is a member of the Anthony B. Dunn Heritage Society of 1957 and has been a consistent and generous donor to the school. His foresight in including Dunn School in his estate plans more than two decades ago is indicative of someone who is willing to give back by looking ahead.