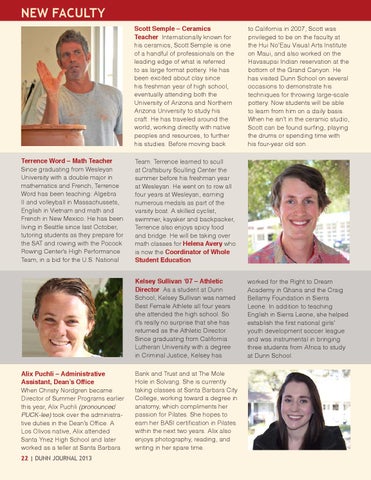 new faculty Scott Semple – Ceramics Teacher Internationally known for his ceramics, Scott Semple is one of a handful of professionals on the leading edge of what is referred to as large format pottery. He has been excited about clay since his freshman year of high school, eventually attending both the University of Arizona and Northern Arizona University to study his craft. He has traveled around the world, working directly with native peoples and resources, to further his studies. Before moving back Terrence Word – Math Teacher Since graduating from Wesleyan University with a double major in mathematics and French, Terrence Word has been teaching: Algebra II and volleyball in Massachussets, English in Vietnam and math and French in New Mexico. He has been living in Seattle since last October, tutoring students as they prepare for the SAT and rowing with the Pocock Rowing Center’s High Performance Team, in a bid for the U.S. National

Team. Terrence learned to scull at Craftsbury Sculling Center the summer before his freshman year at Wesleyan. He went on to row all four years at Wesleyan, earning numerous medals as part of the varsity boat. A skilled cyclist, swimmer, kayaker and backpacker, Terrence also enjoys spicy food and bridge. He will be taking over math classes for Helena Avery who is now the Coordinator of Whole Student Education. Kelsey Sullivan ‘07 – Athletic Director As a student at Dunn School, Kelsey Sullivan was named Best Female Athlete all four years she attended the high school. So it’s really no surprise that she has returned as the Athletic Director. Since graduating from California Lutheran University with a degree in Criminal Justice, Kelsey has

to California in 2007, Scott was privileged to be on the faculty at the Hui No’Eau Visual Arts Institute on Maui, and also worked on the Havasupai Indian reservation at the bottom of the Grand Canyon. He has visited Dunn School on several occasions to demonstrate his techniques for throwing large-scale pottery. Now students will be able to learn from him on a daily basis. When he isn’t in the ceramic studio, Scott can be found surfing, playing the drums or spending time with his four-year old son.

Bank and Trust and at The Mole Hole in Solvang. She is currently taking classes at Santa Barbara City College, working toward a degree in anatomy, which compliments her passion for Pilates. She hopes to earn her BASI certification in Pilates within the next two years. Alix also enjoys photography, reading, and writing in her spare time.

worked for the Right to Dream Academy in Ghana and the Craig Bellamy Foundation in Sierra Leone. In addition to teaching English in Sierra Leone, she helped establish the first national girls’ youth development soccer league and was instrumental in bringing three students from Africa to study at Dunn School.