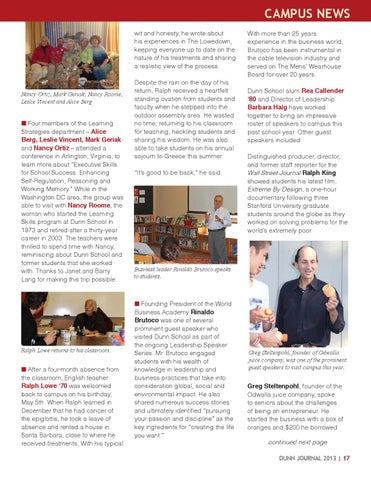 Campus News wit and honesty, he wrote about his experiences in The Lowedown, keeping everyone up to date on the nature of his treatments and sharing a realistic view of the process.

n Four members of the Learning Strategies department – Alice Berg, Leslie Vincent, Mark Geriak and Nancy Ortiz – attended a conference in Arlington, Virginia, to learn more about “Executive Skills for School Success: Enhancing Self-Regulation, Reasoning and Working Memory.” While in the Washington DC area, the group was able to visit with Nancy Roome, the woman who started the Learning Skills program at Dunn School in 1973 and retired after a thirty-year career in 2003. The teachers were thrilled to spend time with Nancy, reminiscing about Dunn School and former students that she worked with. Thanks to Janet and Barry Lang for making this trip possible.

Ralph Lowe returns to his classroom.

n After a four-month absence from the classroom, English teacher Ralph Lowe ‘70 was welcomed back to campus on his birthday, May 5th. When Ralph learned in December that he had cancer of the epiglottis, he took a leave of absence and rented a house in Santa Barbara, close to where he received treatments. With his typical

Despite the rain on the day of his return, Ralph received a heartfelt standing ovation from students and faculty when he stepped into the outdoor assembly area. He wasted no time, returning to his classroom for teaching, heckling students and sharing his wisdom. He was also able to take students on his annual sojourn to Greece this summer. “It’s good to be back,” he said.

With more than 25 years experience in the business world, Brutoco has been instrumental in the cable television industry and served on The Mens’ Wearhouse Board for over 20 years. Dunn School alum Rea Callender ‘80 and Director of Leadership Barbara Haig have worked together to bring an impressive roster of speakers to campus this past school year. Other guest speakers included: Distinguished producer, director, and former staff reporter for the Wall Street Journal Ralph King showed students his latest film, Extreme By Design, a one-hour documentary following three Stanford University graduate students around the globe as they worked on solving problems for the world’s extremely poor.

n Founding President of the World Business Academy Rinaldo Brutoco was one of several prominent guest speaker who visited Dunn School as part of the ongoing Leadership Speaker Series. Mr. Brutoco engaged students with his wealth of knowledge in leadership and business practices that take into consideration global, social and environmental impact. He also shared numerous success stories and ultimately identified “pursuing your passion and discipline” as the key ingredients for “creating the life you want.”

Greg Steltenpohl, founder of Odwalla juice company, was one of the prominent guest speakers to visit campus this year.

Greg Steltenpohl, founder of the Odwalla juice company, spoke to seniors about the challenges of being an entrepreneur. He started the business with a box of oranges and $200 he borrowed continued next page DUNN JOURNAL 2013 | 17