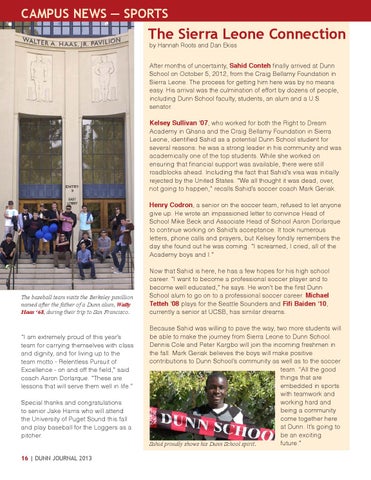 The Sierra Leone Connection by Hannah Roots and Dan Ekiss

After months of uncertainty, Sahid Conteh finally arrived at Dunn School on October 5, 2012, from the Craig Bellamy Foundation in Sierra Leone. The process for getting him here was by no means easy. His arrival was the culmination of effort by dozens of people, including Dunn School faculty, students, an alum and a U.S. senator. Kelsey Sullivan ‘07, who worked for both the Right to Dream Academy in Ghana and the Craig Bellamy Foundation in Sierra Leone, identified Sahid as a potential Dunn School student for several reasons: he was a strong leader in his community and was academically one of the top students. While she worked on ensuring that financial support was available, there were still roadblocks ahead. Including the fact that Sahid’s visa was initially rejected by the United States. “We all thought it was dead, over, not going to happen,” recalls Sahid’s soccer coach Mark Geriak. Henry Codron, a senior on the soccer team, refused to let anyone give up. He wrote an impassioned letter to convince Head of School Mike Beck and Associate Head of School Aaron Dorlarque to continue working on Sahid’s acceptance. It took numerous letters, phone calls and prayers, but Kelsey fondly remembers the day she found out he was coming. “I screamed, I cried, all of the Academy boys and I.”

The baseball team visits the Berkeley pavillion named after the father of a Dunn alum, Wally Haas ‘68, during their trip to San Francisco.

“I am extremely proud of this year’s team for carrying themselves with class and dignity, and for living up to the team motto - Relentless Pursuit of Excellence - on and off the field,” said coach Aaron Dorlarque. “These are lessons that will serve them well in life.” Special thanks and congratulations to senior Jake Harris who will attend the University of Puget Sound this fall and play baseball for the Loggers as a pitcher. 16 | DUNN JOURNAL 2013

Now that Sahid is here, he has a few hopes for his high school career. “I want to become a professional soccer player and to become well educated,” he says. He won’t be the first Dunn School alum to go on to a professional soccer career. Michael Tetteh ‘08 plays for the Seattle Sounders and Fifi Baiden ‘10, currently a senior at UCSB, has similar dreams. Because Sahid was willing to pave the way, two more students will be able to make the journey from Sierra Leone to Dunn School. Dennis Cole and Peter Kargbo will join the incoming freshmen in the fall. Mark Geriak believes the boys will make positive contributions to Dunn School’s community as well as to the soccer team. “All the good things that are embedded in sports with teamwork and working hard and being a community come together here at Dunn. It’s going to be an exciting future.” Sahid proudly shows his Dunn School spirit.