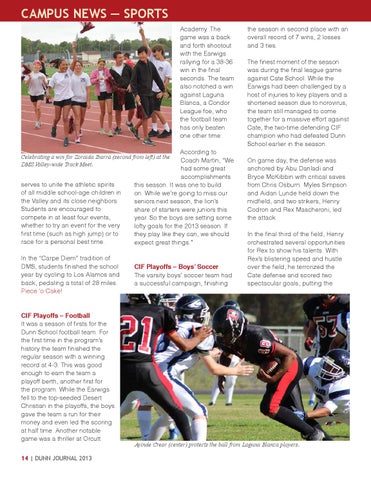 Campus News — Sports Academy. The game was a back and forth shootout with the Earwigs rallying for a 38-36 win in the final seconds. The team also notched a win against Laguna Blanca, a Condor League foe, who the football team has only beaten one other time. According to Coach Martin, “We had some great accomplishments this season. It was one to build on. While we’re going to miss our seniors next season, the lion’s share of starters were juniors this year. So the boys are setting some lofty goals for the 2013 season. If they play like they can, we should expect great things.”

Celebrating a win for Zoraida Ibarra (second from left) at the DMS Valley-wide Track Meet.

serves to unite the athletic spirits of all middle school-age children in the Valley and its close neighbors. Students are encouraged to compete in at least four events, whether to try an event for the very first time (such as high jump) or to race for a personal best time. In the “Carpe Diem” tradition of DMS, students finished the school year by cycling to Los Alamos and back, pedaling a total of 28 miles. Piece ‘o Cake! CIF Playoffs – Football It was a season of firsts for the Dunn School football team. For the first time in the program’s history the team finished the regular season with a winning record at 4-3. This was good enough to earn the team a playoff berth, another first for the program. While the Earwigs fell to the top-seeded Desert Christian in the playoffs, the boys gave the team a run for their money and even led the scoring at half time. Another notable game was a thriller at Orcutt 14 | DUNN JOURNAL 2013

the season in second place with an overall record of 7 wins, 2 losses and 3 ties. The finest moment of the season was during the final league game against Cate School. While the Earwigs had been challenged by a host of injuries to key players and a shortened season due to norovirus, the team still managed to come together for a massive effort against Cate, the two-time defending CIF champion who had defeated Dunn School earlier in the season. On game day, the defense was anchored by Abu Danladi and Bryce McKibbin with critical saves from Chris Osburn. Myles Simpson and Aidan Lunde held down the midfield, and two strikers, Henry Codron and Rex Mascheroni, led the attack. In the final third of the field, Henry orchestrated several opportunities for Rex to show his talents. With Rex’s blistering speed and hustle over the field, he terrorized the Cate defense and scored two spectacular goals, putting the